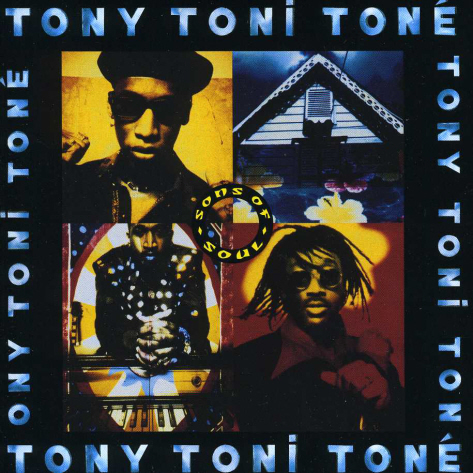 Entering into 1993, New Jack Swing -- a once dominant force in music that managed to successfully spill over from the 1980s into the 1990s -- was slowly going into decline. With the appearance of grunge rock and the rise of West Coast gangster rap, the "innocence" of pop-rap and the images of suave and suited up guy groups were being pushed out for grittier fare, changing the tone of soul music yet again and leading it towards its oncoming mutation. Akin to the moment where Black artists found home in synth-funk and New Jack Swing in the '80s after disco's demise in the late 1970s, the New Jack Swing artists in turn had to find footing once the '90s came into fruition. No qualms for Tony! Toni! Tone!, an Oakland, California trio comprised of brothers, Raphael (Saddiq) and Dwayne Wiggins, and their cousin, Timothy Christian Riley, as after a successful string of R&B hits, found themselves reshaping the soul formula their way and confidently going forward into the '90s with their game-changing third album Sons of Soul.
Center

My intro to this album was naturally through "Anniversary" as I heard it being constantly played on the radio growing up, along with seeing T3 on late night TV romping around to "If I Had No Loot" with Raphael rocking that twisted fade better than anyone I knew. They were three guys who looked like they were having a lot of fun making music, and I had to share in that fun too by dancing and jumping around in my living room. But like most great albums, Sons of Soul found me again later in life, this time when I went to college back in the mid-2000s. When I got my first car the joy of getting to play DJ in it became prevalent, and Sons of Soul was one of my constant plays taking me to classes and back to grocery store jaunts to hanging out with my girls on a Friday night. What kind of saddens me is that even in all of its acclaim, all of its hits and influence, a lot of people sort of forget the album as a whole, and just know it as "that album that contains 'Anniversary.'"

True, the lover's anthem "Anniversary" is present and it's the group's most well-known hit when it reached the #10 spot in 1993. On the album it is a sprawling 10-minute bedroom opus that has some wonderful harmonizing and orchestral touches, not to mention that inescapable soul boy chorus ("doooo yoooou know what today isss...it's our anniversary"), that is almost a running joke now whenever someone has something yearly to celebrate. As gorgeous and classic as "Anniversary" is, it is just one vignette of many others featured on Sons of Soul.

The album's unique structure is that it cribs from numerous soul and funk acts from yesteryear, a technique that at the time began to gain more prominence. All of this is intentional as T3 decided that after the success of 1990's The Revival, their third act was to be a smoother, reclining affair diving even further into the land of homage. This leads to why the album's title is apt as Tony! Toni! Toné! are noting their position as descendants to the sights and spirits of the soul movement and are capable to carry that tradition onward. Produced heavily by the trio, the album doesn't just cover Soul Music 101 in all the tightly constructed samples, beats and scratches; they still keep their New Jack meets Bay Area funk vibe in full swing, but refine it with utilizing the blueprints of soul and jazz for a denser sound. And with the added aid of live instrumentation, string arrangements by the legendary Clare Fischer, appearances from notable session musicians (Gerald Albright and Lenny Pickett), and having production and programming support done by A Tribe Called Quest's Ali Shaheed Muhammad, Sons of Soul does indeed take you to a very different place than most R&B albums that were released that year.

What is fun about this trip as a whole is hearing snatches of this sound, that artist, that recognizable sample, as the trio really do give you a patchwork of familiar sounds, stitching each complete square together and tell the story of soul during its golden eras in the '60s and '70s, straight from those who listened with astute, young ears during its unfolding. From the flavors of George Benson's "Give Me The Night" guitar strums on "Fun" back to some serious Donald Byrd moments on my all-time favorite track "I Couldn't Keep It To Myself," Sons of Soul really does tell an expansive story, but its nowhere near being a copy and paste job.

The album's first five tunes offer the most hook laden tracks, jumping from 1960s Motown back to 1993 in its sounds, and everything just clicks. "If I Had No Loot" became T3's highest charting single hitting at #7 on the Billboard Hot 100, and no wonder as it is nothing short of bouncy fun, laced with prominent guitar licks and fibers of Eddie Floyd's classic, "Knock On Wood." "Tell Me Mama" celebrates some Marvin Gaye exuberance, with "Leavin'" having Raphael slipping into some lovely harmonizing a la The Temptations. Another two of my favorite songs here are "What Goes Around" and "My Ex-Girlfriend." The former is the most New Jack swinging of the bunch that is spiced up with some sharp ragga rap verses from Trinidadian dancehall artist General Grant, while the latter covers a humorous slant at an ex's new extra-curricular activity over a seamless sample of Sly & The Family Stone's "M'Lady."

As noted on The Revival, Tony! Toni! Toné! can whip up the romance and Romeo their way into some slow jams, as the suite of "Slow Wine" and final single "(Lay Your Head On My) Pillow" are rightly sweet and sensual, and are perfect precursors to the finale of "Anniversary." As the album goes on the songs get even more experimental and expansive. "Gangsta Groove" features vocalizing that mirrors the naughty boys of funk like Funkadelic and The Ohio Players, while "Tonyies In The Wrong Key" experiments fully with merging jazz and hip-hop, with Saddiq's slurred rap flows guiding the track into a rich underground vibe.

Sons of Soul
ended up being Tony! Toni! Toné!'s highest-selling, and most critically acclaimed record to date. Thanks to "Feels Good" trickling down to the pop charts in 1990, T3 saw resurgence to that chart with "If I Had No Loot" and "Anniversary." Still as much as Tony! Toni! Toné! could show variance in their sound and attract admirers, they couldn't retain such an audience as the decade moved forward, as their eclectic soul sound deemed hard to fit into neat categories. Tony! Toni! Toné! also were moreso a band, not a adult-contemporary cross-over "guy group" like Boyz II Men or All 4 One, nor were they in league with the bad boys of R&B like Jodeci or Dru Hill, as they barely tossed a curse here or offered up over-sexualized lyrics to sell a point. They were a bit abstract among their peers, so abstract that they ended up being bounced off the roster of Janet Jackson's 1993 tour with the complaint that they weren't "pop" enough for Jackson's audience (ironically .janet is the most urban album Jackson did at the time). Tony! Toni! Toné! would release one more album, 1996's House of Music, and continue to expand their soul sound to fans' pleasure, but their acclaim would be short-lived as they disbanded soon after to embark on solo projects once the R&B climate changed by the late '90s.

Like I do with a lot of albums from my childhood, I recapture my youth with each listen, and even though it's going on 20 years of age, Sons of Soul still has a lot of youthfulness to it, never mind its obvious old school practices. What's funny is that the method Sons of Soul took is what is the normal approach to music today, almost to points where songs are so fine-tuned and replicated from the past that it's hard to tell where the influence ends and the real artist even begins. Even Raphael Saddiq himself has fallen in the 21st century trap of replication, as his current spin into the Motown butter has herald solo projects like 2008's The Way I See It and 2011's Stone Rollin'. While those albums are good on their own merits, they pale to the experimentation Saddiq made while in Tony! Toni! Toné!. Telling, as Sons of Soul time capsules how fresh this approach to dig in the crates of yesteryear was in 1993, and how this element would pretty much elevate soul music for a new generation and further aid in mapping out the remaining course of 1990s R&B as it began on its road to its decade-long renaissance.