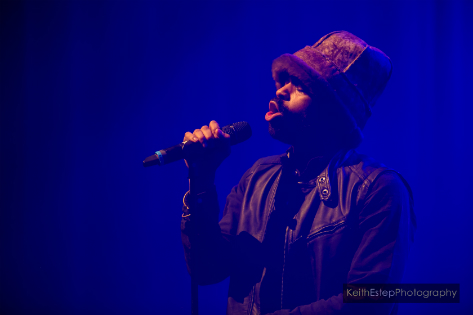 What most people don't know about Bilal is that he loves to laugh. Serious stories often turn into a joke, followed by his big boisterous laugh and then suddenly back to serious. We experienced this when we caught up with the A Love Surreal singer on December 14th while he was in Washington, DC getting ready for another performance at the Howard Theatre. All jokes aside, in the wild, energetic artist you'll find a relaxed academic who has a passion for the fundamentals of jazz. During his DC performance, Bilal impressed the audience by going toe-to-toe with his background singer, scatting and mimicking various horns for about 10 minutes. While Bilal's music is constantly evolving, his character and passion for music remains the same. Along with an entertaining story involving wild dogs in Greece, Bilal sat down with us to talk about touring, his favorite collaborations and what he has in store for us in 2014.
Center

SoulBounce: You just got off your European tour. Where did you go?

Bilal: Oh, we went a lot of places, spots I haven't really been to. We went to Athens, Greece; it was great, we stayed a whole week there. I almost got eaten by two wild dogs in the mountains, but that's a whole 'nother story.

SB: What?! What were you doing in the mountains? Were you performing on this mountain?

B: No, no I wanted to climb up this mountain because I was across the street and when I would go on my little patio thing there was like a monument up there and people like sitting on the mountain, it just looked real good. I wanted to go up there and write you know, and do whatever. So I saw what looked like it was a path, I walked up the path, and on the way up it just starts to get really quiet. And then in the distance I heard a bark, and I looked back and it was like a giant, like six-foot dog. Like huge!

B: No, but it was so amazing, I got so much clarity. You'd be amazed how silent your mind is --

SB: When you're about to get got!

B: Upon the idea, yeah! [laughter]

SB: So you're on the European tour, besides almost getting eaten by dogs in Greece on mountains, what was the experience like? How does the European audience take your music?

B: Man, they really just come to listen, I feel like my audience is the same everywhere, though, actually. It has turned into that, especially after like the shows we've been doing since we've been back. Like we did a show in Philly and kept the same show. What happened out there, we just started to venture into the music more and with A Love Surreal I really went into kinda writing in real book form. I call that the real book form, like how they would teach us to write in school in just like a chart, I would try to keep it mad simple like writing a jazz tune. So when we were out there we had to play at this one club and we had to do two sets, sometimes we play the Blue Note in New York and do that but this time instead of playing more tunes, let's just stretch the tunes out.

B: Just stretch the tunes out and make it a little longer or whatever and then venture into it. To stretch the set out because we had to do two two-hour shows; instead of like a one-hour show, we had to do one-hour and then take a break and do another hour set so two shows basically. So we just elongated our songs and it really turned into some jazz totally, but on a different kind of a vibe because we were still playing our stuff, so we got a chance to really stretch out. I loved it man.

SB: Because jazz is your thing. Why are you so much into jazz compared to other genres?

B: I'm into a lot of things but jazz is just the way I understand things, you know what I'm saying? I was learned in jazz, I went to school for it, so in jazz they teach you theory and theory is basically a lot of different concepts that you use while you're playing. There's a giant database that you use, like "oh, I'm gonna put this lick right here" or "I'm gonna put this over this," so when I listen to whatever that's how I break music down. If it's a hip-hop song, I'll listen to it and break it down like how I learned. Immediately I'll go into my nerd thing and be like, "oh this is in four four," "what key is this song in?" You know, that's just my learning experience.

SB: Because you're learned. 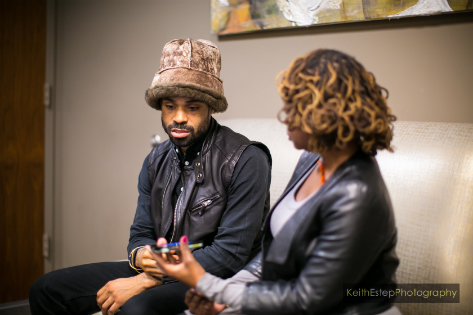 SB: Yes you do, you know what's going on! Do you have any more shows coming up?

SB: So you're working on your next album?

B: I just work. I just work to work, I like the practice of it all you know.

SB: Okay, cool. So can we look forward to anything different from you next year?

SB: [laughs] That's not what I heard. Maybe the dogs on the mountain told you, I don't know.

B: No, the dogs didn't tell me anything. They told me they were going to eat me.

SB: In what language?

SB: Back to music. So on Friday, something crazy happened, there was this artist who released an album with no promotion, no anything. What did you think about that? Her name's Beyoncé by the way.

SB: She released an album on Friday the 13th at midnight, no promotions, no marketing, no nothing, just set it out and she's already number one on iTunes. What do you think about that approach?

B: Well, she doesn't even really need promotion anymore, everybody's into her beyond the music you know what I'm saying. That just proved that point!

SB: I know you've worked with Beyoncé, Jay Z and other artists, tell me about those experiences collaborating with people.

B: It's fun, you know every time I collaborate with people I learn something. It's just fun to watch because I always listen to people's music and just wonder how they made it, how they are while they're creating. And I get excited because I'm like I always wanted to see what this cat's method was.

SB: Any favorite collaborations, like someone you really vibed with?

B: Yeah there's cats, like Amir [Questlove], cats I learned from like Amir because we went to the same high school and they were already like talking about [their process] you know, so I'd been wanting to see it. It was very organic, a lot of the ways that I've seen him or Dilla, Dilla was another one, aww man great to watch! I would listen to his beats like "how did he do that?" And even after seeing him I'm like "how did he do that?" [laughs] But those cats, yeah I love it, I love it, I love it. It's one thing to have a whole lot of talent but most cats that really get out there, they also have an ethic, you know a work ethic, a way, you know what I'm saying? So s**t, even Dr. Dre, I learned from this man.

SB: And you have your own work ethic because I feel like every show I've seen is different. You never perform a song the same way and your performances get really raunchy [laughs]; your dancing style you know is very unique.

B: My dancing style is more reflex than anything; I have no idea what I'm doing. [laughs]

SB: So your dancing style, your performance style is just very unique. Where do you get your inspiration and your funk?

B: I get it from the heavens you know, I tap out and tune out and zone in or whatever. The less I know about what the hell I'm doing the better people like it [laughs].

B: I have no idea! That is something I also will never find out.

SB: Yeah, no one will ever know. So who are you listening to these days? Any new artists you're checking for?

B: Oh man, I've been listening to hip-hop stuff. I like Schoolboy Q, I like his album, it's dope. Kendrick Lamar, of course. I kinda like the A$AP crew, too. Yo, I like the new song they got with Method Man, I like that beat! I'm liking a lot of new hip hop I guess.

SB: And last question, what makes your soul bounce?

B: What makes my soul bounce? Whatever makes me bounce. Isn't there a soul inside of you? Oh, this couch. [starts bouncing up and down]

B: I have no understanding of the workings of the soul. It uses me, I use it. It uses me mostly. 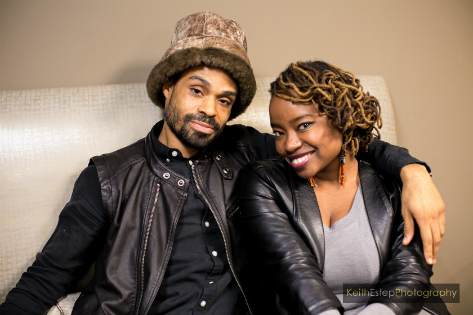