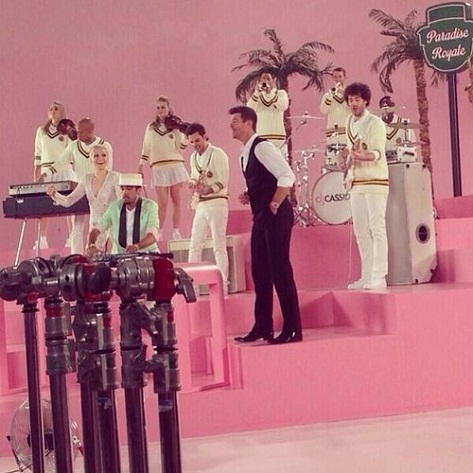 The return of disco-ready jams has been a topic of discussion this year, especially with the success of Daft Punk's "Get Lucky," the resurgence of disco legend Nile Rodgers and many acts weaving the sound of the era into their songs. Hell, even we here at SBHQ had a SoundTable about it. And now DJ Cassidy gives us yet another disco-flavored jam to end the year. "Calling All Hearts" ropes in blue-eyed soulsters Jessie J and Robin Thicke for an upbeat, dance floor-packing jam that finds all three imploring us all to shake our groove thangs for love. It's no surprise that Robin, who has flirted with the disco sound before, feels right at home on this groove. However, Jessie J's soulful (and mostly restrained) vocal adds a perfect counterpoint to Robin's. And the soundbed that DJ Cassidy has concocted is a perfect throwback to those hot and fun nights of the late '70s and early '80s. No word yet on when the single will be released officially, but the trio have already shot a video for the track, so I can only imagine that it's coming soon. While you wait for that one, put on your dancing shoes and take a listen to the song right now.