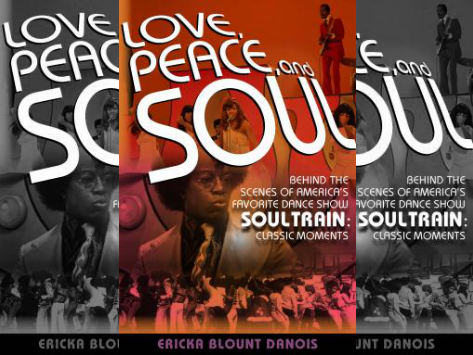 Love, Peace, and Soul: Behind the Scenes of America's Favorite Dance Show Soul Train: Classic Moments (Backbeat Books) is a comprehensive, albeit crammed book about the "hippest trip in America." The piece follows the career and vision of Don Cornelius, conductor emeritus of the iconic Soul Train, and leads readers through the high and low points of Soul Train's run historic run.
Center

Ericka Blount Danois grapples with Soul Train's sizable history by beginning with Don Cornelius' humble rise from Chicago radio personality to host of a nationally syndicated show based out of Los Angeles. Cornelius' contribution as a facilitator and curator of Black music cannot be understated. He helped bring the music, dance and aesthetic of Black folks to the world, and he held a mirror up to those same folks so they could regard their own beauty.

Moving through such a large swath of time in such a short number of pages is a difficult feat just barely achieved, as reading through the large amount of details can leave the reader quite breathless. Copious photos of the Soul Train in action give a well-needed reprieve from the density of information. A tighter narrative scope would have made this material sing.

While the timeline is expansive and sometimes confusing, it's worth mentioning that this book is a great history primer for those of us who boarded the Soul Train late -- '80s and '90s babies who remember it as its star was fading rather than as a gold mine of talent and culture for our parents' generation. Every page dripped with the names of musicians who appeared on Soul Train that went on to be icons (the Jackson 5, Marvin Gaye). It was surprising to learn that even some of Black America's prominent politicians (reverends Al Sharpton and Jesse Jackson) boarded the Train, and to learn about the folks who got their starts at Soul Train dancers (Vivica A. Fox and Rosie Perez). How Don Cornelius leveraged the Soul Train platform to launch the careers so many artists was revelatory.

Blount also gives Soul Train enthusiasts a healthy dose of dirt on the behind-the-scenes horse-trading and attitudes that flourished on the Soul Train set. The culture of Soul Train and the music business at the time was full of characters, each of which elbowed for a chance to get their 15 minutes of fame. Pissing contests between Cornelius and Dick Clark, brawls between Jody Watley and Shalamar's Jeffrey Daniel, drugs and sex were all a part of the Soul Train experience. Reading about it showed me that even though the industry has changed in the internet age, so much is still the same.

Love, Peace, and Soul is the literary equivalent of going through your great-aunt's photo album. The pictures are faded, the dates are a bit jumbled and the history isn't as neat as what would be found in a textbook, but it is an important part of remember the musical legacy that came before.