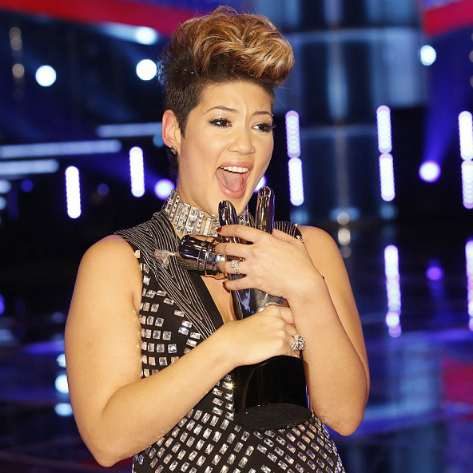 I've been loosely following The Voice this season, although my love/hate relationship with the singing competition show has long been chronicled on this very website. I appreciate the platform that amateur artists have, the second chances given to already established acts and the entertaining nature of the competition. But The Voice isn't about finding the next superstar singer. It's about the coaches -- Adam Levine, Ceelo Green, Christina Aguilera and Blake Shelton -- and their lively interactions, witty banter, occasional performances and advancing their careers. So many talented singers have sung on The Voice stage -- and some have even won -- only to fall into the black hole of oblivion and never be heard from again. I pray that same fate doesn't await this season's champion Tessanne Chin who logged in a win for Team Adam and beat fellow finalists Jacquie Lee and Will Champlin.

Not only was this a win for Tessanne and Adam, but it was also a win for the island of Jamaica, where this lovely singer calls home. Tessanne was the Usain Bolt of The Voice, leaving the competition in her dust and sealing her victorious fate on Monday night when she performed a duet with Levine on the Beatles' classic "Let It Be" and a stunning rendition of Whitney Houston's "I Have Nothing." She was so impressive -- and has been all season for that matter -- that there really was no other choice to be made. Couple her talent with her sunny disposition, lilting accent and humility, and she will rep The Voice and Jamaica well. Watch her final performances, her winning moment and her first performance of the winner's single "Tumbling Down," and join me in licking shots in the air (it's a Jamaican thing, you wouldn't understand) for Tessanne Chin.