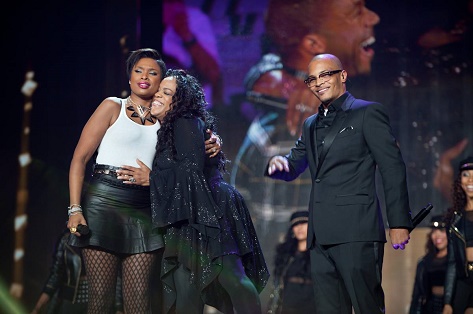 Jennifer Hudson has been making the awards show rounds with her new hit "I Can't Describe (The Way I Feel)." After performing it for the first time last month on Black Girls Rock!, JHud brought the throwback disco jam to the stage for this year's Soul Train Awards. But she didn't just do a rehash of her previous showing. Instead, she decided to shut down the stage and pay tribute to a couple of the soulful divas that inspired the track. Working her pixie cut for all its worth and looking fabulous, the dreamgirl worked her magic before bringing out disco legend Evelyn "Champagne" King out to perform a brief snippet of her 1981 hit "I'm In Love." But before the audience could catch their breath, Jennifer brought legendary voice Chaka Khan out to perform a bit of Rufus' 1979 jam "Do You Love What You Feel." Each song segued perfectly in and out of "I Can't Describe" and allowed Jen to bask in the glow of the legends. She then capped it all off with an appearance by none other than the song's official guest T.I.. It was a high energy way to kick off the most soulful night in television.

TAGS:  chaka khan", evelyn "champagne" king, jennifer hudson, rufus, t.i.
Previous: Morning Soul: I Need The Strength Of You By My Side Next: Wale & Stokley Williams Bring Their ‘LoveHate Thing’ To The Soul Train Awards 2013