Kelly Rowland Visits ‘Arsenio’ To ‘Talk’ About Everything But Her Album 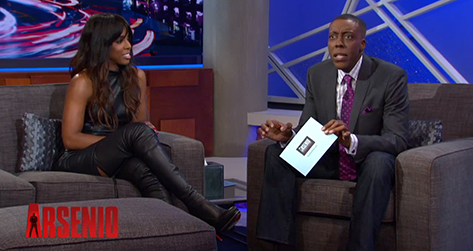 Four albums and almost 10 years into her solo career, and Kelly Rowland finally has the chance to get it right. Earlier this year she released Talk A Good Game and received rave reviews and support, yet it almost seems like she forgot about it herself. Last night Rowland sat down with Arsenio Hall to discuss her position as a judge on FOX's talent series The X Factor, her rumored engagement and, of course, Beyoncé. Other than mulling over the controversial lyrics in "Dirty Laundry" and her past feelings regarding Beyoncé's success, talk of Kelly's latest musical work was bypassed. Nonetheless, it's still good to see this Destiny's Child alum stepping into her own spotlight and looking quite gorgeous while doing so. When asked what advice she would give her younger self she offered, "I would probably tell myself to move out of faith and just be courageous." Here's to hoping she takes home that GRAMMY for "Without Me," alongside Fantasia and Missy Elliott, and brings forth some more quality R&B music next year.
Center
After the bounce