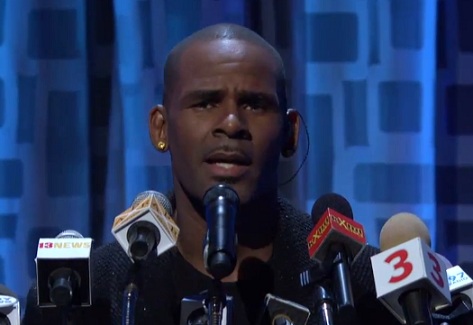 Last night's edition of Arsenio was all about the self-proclaimed "cookie monster" himself, R. Kelly. The notorious R&B lothario was in the house to promote his latest album Black Panties, which is set to arrive in stores on December 10th. During his time on the show, he talked with host Arsenio Hall about his writing inspirations, the music he's listening currently listening to (Rihanna, Trey Songz and Ciara make the cut), and whether he prefers panties or thongs (insert eye roll). But an R. Kelly takeover isn't complete without music, and he brought that, too. He performed the Black Panties track "Shut Up" for the crowd from the podium of a pretend press conference and even delved back in his catalog for Love Letter's "When A Woman Loves." However, the most poignant moment of the night came when Kelly performed "Soldier's Heart" in honor of the late Nelson Mandela, who passed yesterday. While R. Kelly's lasciviousness can be a bit much at times, he always comes with bright moments like "Soldier's Heart" in his repertoire that remind us of what a great songwriter he can be. Watch video of all the performances that Mr. Kelly graced the Arsenio stage with last night right here.
Center