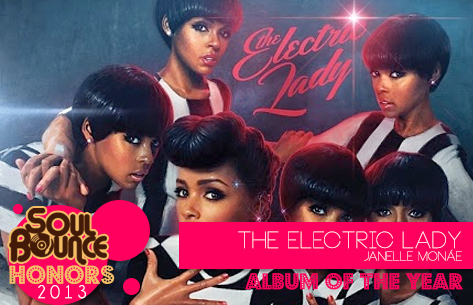 "You can take my wings but I'm still goin' fly/And even when you edit me the booty don't lie," proclaimed Janelle Monáe on "Q.U.E.E.N." Powerful words those were, not only because the line summed up Monáe and her fictional android heroine Cindi Mayweather's quest for freedom, truth, self-acceptance and love, but also because it perfectly articulated what sets Monáe and her music apart from the hyper-sexualized robots that are rampant in the recording industry today. With that potent line from her lead single, the scene was set for Monáe's second full-length studio album, the stellar The Electric Lady.

Serving as the fourth and fifth suites in Monáe's conceptual body of work on Cindi Mayweather, The Electric Lady was a genre defying, funked out, soulful reminder that great music exists and can succeed on a mainstream, commercial level. On The Electric Lady, Janelle delivered another strong and consistent album that stayed true to her quirky persona and musicality. Joined for the ride by Prince, Erykah Badu, Solange, Miguel and Esperanza Spalding (not a shabby list of collaborators, right?), The Electric Lady began with a heavy dose of funk, with "Givin' Em What They Love," assisted by The Purple One, followed by the aforementioned lead single with Badu and the title track featuring Solange. Three songs in and this album already delivered more than many others do in their entirety.

But Monáe doesn't get complacent, as this album was an exploration through life that transcended any genre or particular style, kind of like Monáe herself. Broken up by radio interludes that told the story of Mayweather, The Electric Lady had different facets much like people themselves. From funk to sensual slow jams ("Primetime") to frenzied gospel ("We Were Rock & Roll") to tender Jackson Five-esque ballads ("It's Code") and a '70s Stevie Wonder style ode to the women doing it tough ("Ghetto Woman"), Monáe tackled it all with confidence and sass, creating an album that stays true to its concept while breaking out of any boxes or limitations that often come with that.

On a strong album such as The Electric Lady it became the moments when Monáe showed her fragility and vulnerability that became a highlight. "To be victorious you must find glory in the little things," Janelle boldly but unpretentiously declared on "Victory" before sharing a piece of her heart on the soulful "Can't Live Without Your Love." While on "Dorothy Dandridge Eyes" Monáe and Esperanza Spalding discussed a woman more intoxicating than any strong whisky over a hypnotizing jazz/soul rhythm.

But Monáe wasn't about to leave you on those delicate notes. Oh no, she even made sure she had the picture perfect closing track with "What An Experience." With its upbeat '80s keys, punchy brass and declaration of love, this song helped to ensure The Electric Lady ended on a high note, encouraging the listener to put your hand over Monáe's heart and feel the experience. And what an experience The Electric Lady as a whole is. With each track Monáe created a style that was distinct while still staying true to her layered, orchestral sound, effortlessly inviting the listener in and delivering with each play something new and fresh to your ear. It's little wonder The Electric Lady is the SoulBounce Honors 2013 Album of the Year. After all, there's a little of the funky, defiant, complex and striking electric lady in all of us.