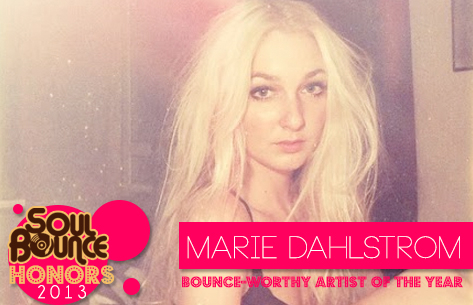 It's a clichéd statement, but the true facts can't be denied -- there is some kind of magic in the waters of the Scandinavian region that is aiding in the harvesting of some of the keenest and most inventive soul musicians at current. We've had the privilege here at SoulBounce of following, sharing and showing adulation for the work of such immense talent as the Boom Clap Bachelors, Kissey Asplund, Philip Owusu, Nanna B and Fatima. Of course, we can't overlook Quadron, our most profiled and beloved of the bunch, as they walked away with the Bounce-Worthy honor many moons ago, and continue to have a blossoming career well into today. Like Quadron before, once again we give honor to another artist who deems Denmark home, as singer-songwriter Marie Dahlstrom introduced us to jazz laced soul that is pleasingly unique, captivating at every turn and undoubtedly evoked a profound impression on us this year.

Dahlstrom was first brought to our attention a year ago when the hauntingly beautiful track "Search" wafted through our ear drums. With her crystal clear vocals that possessed an earthy richness and a balanced tone wise beyond her years, crowned and kissed Bounce-Worthy she rightfully was. She lived up to the acclaim as she continued on a steady stream of releasing material off of her 2011 debut EP Feelings with such notables as the burning yearn of "I Want a Man" and the up-tempo horn-coated soul jam "Could We Buy a House." If her voice wasn't compliment enough, her sharp turn of the songwriting pen shouldn't be ignored as is her penchant for scoping out the right producers and duet partners (Afta Mist and Jamal Ross) that contribute to Dahlstrom's formula for kneading the traditional forms of jazz into the modern soul blueprint without a wrinkle.

Easily Dahlstrom can be viewed as a moodier Amel Larrieux or Esperanza Spalding, as well as be considered a cum laude graduate of Sade's academy of coolness and cerebral tranquility. Yet with these obvious influences and styles, Dahlstrom doesn't mime her influences, as where they end, she begins as her own rightful chanteuse. Clearer evidence of her ability to apply and transform came full focus on her second EP, this year's Renditions, where she elevated the ideal of the somewhat tricky cover song -- and did it six times over. For each cover Dahlstrom made the unbearable bearable (Chris Brown and Rihanna's "Nobody's Business"), the constantly covered freshly reworked (Little Dragon's "Twice") and the familiar classic dressed up anew (Phil Collins' "In the Air Tonight"), clearly making the case that versatility is her middle name.

Still Marie Dahlstrom hadn't cooled down for 2013 as she also carved out time to partner up with us for a remix competition, and alongside producer Emmavie spun a fiery re-fixed version of her original ballad "Something Like Nice." She continued to heat things up as the year pressed on with her follow-up to Feelings and Renditions, the EP Gloom. While an EP can be considered a full-fledged album (as most great EPs can be) it takes some artists two discs or a lengthy, padded tracklisting to get the point across, but for Dahlstrom, she gets it done in half the amount of time with Gloom. The intimate and arresting 11-track set may be titled like its a bummer, but it bursts at the seams with new twists on soul and contains highlights like noted singles "What's It Gonna Be" and "My Everything" that are both darkly sublime.

Often we complain of time and the fact that there isn't much of it, but Marie Dahlstrom has proven that we are all given the same amount, but it's what we do with it that makes the difference. I feel like the procrastinator as I cruise her SoundCloud page and see how much she has churned out in the last year or so, and what's even more eyebrow-raising is that all of it is on-point and itching to be presented to a widespread audience. Well, the latter will come in time, but for now, there isn't a qualm that Dahlstrom will continue to expand on her bewitching portrait of work well into the new year, work that we'll no doubt excitedly cover. Still we hope, like with all of the Bounce-Worthy honorees of yore, that Marie Dahlstrom will too emerge from the underground, bringing change to the soul game and evoke awe just as much as she kept us in all year-round.