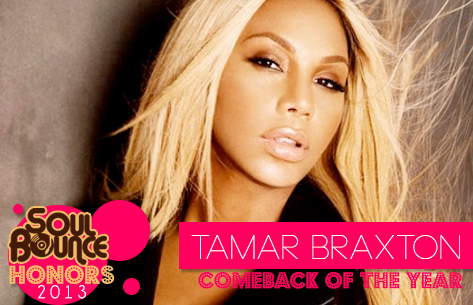 R&B music made a comeback in a major way this year and brought back great talent along with quality material to the forefront. Fortunately for Toni Braxton's youngest sister the resurgence of R&B mixed with her tale of tenacity and reality TV success would make way for her to have her best year yet. With her industry executive husband in her back pocket and the odds in her favor, Tamar Braxton emerged this year and managed to conquer every feat and soar to the top of the Billboard charts for the first time in her solo career.

After her overlooked 2000 debut album Tamar and multiple failed recording deals, Mrs. Braxton-Herbert joined forces with her sisters back in 2011 to give the world a look into their quirky family life on the hit WE tv series Braxton Family Values. Tamar's over-the-top antics and hilarious slogans paved the way for her to not only promote her return to music but opened the doors for her to star in more television shows including the WE tv spinoff Tamar & Vince as well as the talk show The Real. Just as all of this began to bubble over at the start of this year, she released a string of hit singles including "Love and War," "The One" and "All the Way Home" to much fanfare.

While the verdict is still out on the quality of her live performances, there's no denying the soul star power that she brings on her sophomore album Love and War as well as her holiday effort Winter Loversland. With the help of Tiyon "TC" Christian and Lashawn "Big Shiz" Daniels, Tamar put her heart and soul into her musical efforts this year and it certainly paid off. With both releases she perfected a sound that brought together the classic "doo-wop-pop" and the popular "ratchet" sounds, as she would say, without coming off as forced or far-fetched. Her labor of love was not in vain and she did not go unnoticed this award season either, as she collected trophies from the 2013 BET Awards, Soul Train Awards and even grabbed three nominations for the 56th GRAMMY Awards.To top it all off, Mrs. Braxton-Herbert also welcomed a beautiful baby boy into the world at the height of her success yet still managed to get back to business and in shape. Now that's what you call a comeback.