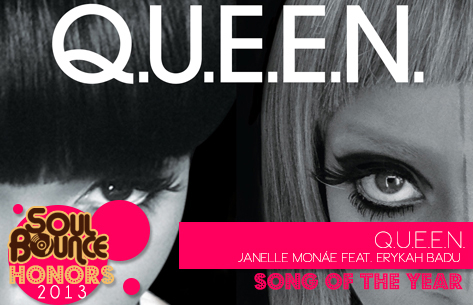 Yes, it's true. We gave Janelle Monáe and Erykah Badu's "Q.U.E.E.N." a so-so review when we first heard it. It wasn't that it was a bad song, it just wasn't the song that we wanted from these two powerful soul sis-stars. "Q.U.E.E.N." didn't knock our socks off and make us want to tip on the "Tightrope" like the first single from The ArchAndroid immediately did. It was all-around unexpected from its eyebrow-raising lyrical content to its unconventional groove, and we didn't quite know what to make of it. However, a funny thing happened when we gathered round to watch the music video premiere -- we finally got it. We had to see the vision to in effect hear what was being said on "Q.U.E.E.N.," and boy did we receive an earful.
Center

It may have taken the sight of the "Q.U.E.E.N." music video to get into its sound, but once we took in the visuals it clicked that this song was much deeper than the catchphrase "the booty don't lie." This song was an empowering anthem with a salient message in the music and a bonafide party filled with funk guitar, thumping bass and sizzling synths. It flipped the script on what we thought we were used to hearing from Monáe and Badu and what we thought we'd hear from them together.

Co-produced by Monáe in-house with her fellow Wondaland Arts Society family members Chuck Lightning and Nate "Rocket" Wonder (who perform together as the group Deep Cotton) and Roman GianArthur, the song was co-written by Janelle, Roman, Dr. Nathaniel Irvin II, Charles Joseph II and Kellindo Parker. The lyrics were very of the times with references to "throwing shade," "serving face" and "twerking" strewn throughout. Janelle hooked the listener with her funkdafied verses, setting the scene for Erykah to slay with the same fervor. Instead, Badu sauntered onto the song's bridge with a laid-back, almost subdued verse punctuated with coos that "the booty don't lie." That interlude was the calm before Janelle's final firestorm where she rapped about societal ills and name-checked strong women from Queen Nefertiti to Harriet Tubman.

In case you thought that this CoverGirl had let her endorsements and higher profile go to her head, "Q.U.E.E.N." reminded everyone that she was still her quirky cool self. This song was for the misfits, those deemed different and ostracized from the very mainstream that's embraced this android superhero. In post-release interviews, Janelle revealed the meaning behind the song's title, breaking the acronym down. According to Ms. Monáe, "the Q represents the queer community, the U for the untouchables, the E for emigrants, the second E for the excommunicated and the N for those labeled as negroid." With that meaning attached to SoulBounce's 2013 Song of the Year, what's not to love? 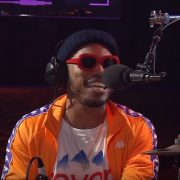 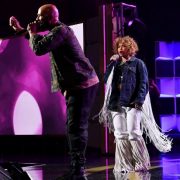