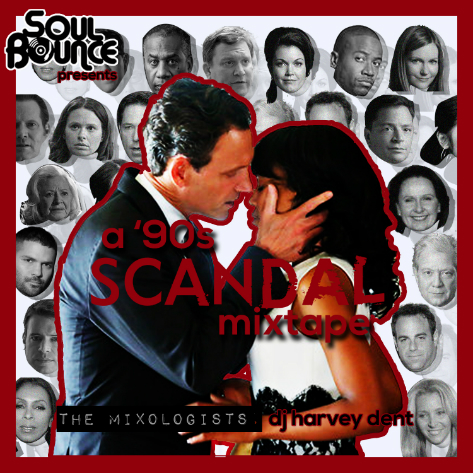 Season three of ABC's hit drama Scandal has been the most exciting season yet with more twists and turns in the plot and lives of the characters we've grown to love and hate than we could imagine in our wildest of dreams. Shonda Rhimes and her writers have upped the ante, raised the stakes and spiked our blood pressures week after week and we are here for the wild ride, which culminates in tonight's winter finale event at 10 pm EST in an episode that will leave us hanging while Scandal takes a break until February 2014.

We don't know what we're gonna do for the next few weeks without our weekly Scandal fix, but to make this pause in the third season a little less painful and to continue our Scandal-inspired mixtape series we present to all you music-loving Gladiators, Fixers and SoulBouncers out there a '90s SCANDAL mixtape by dj harvey dent. After going in with contemporary soul songs on a SCANDALOUS mixtape, dj harvey dent and the crew here at Olivia Dope & Associates have gathered together a group of '90s R&B and soul favorites that relate to all of the scandalous shenanigans between Olivia Pope and President Fitzgerald "Fitz" Grant. On a '90s SCANDAL mixtape you'll hear classics from En Vogue, Lauryn Hill, Mary J. Blige, Jodeci, Lisa Fischer and so many more that'll have you reminiscing on the good old days of the 1990s. Handle your business and download a '90s SCANDAL mixtape right now. 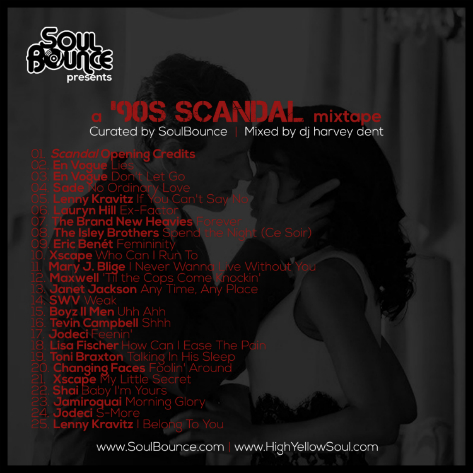