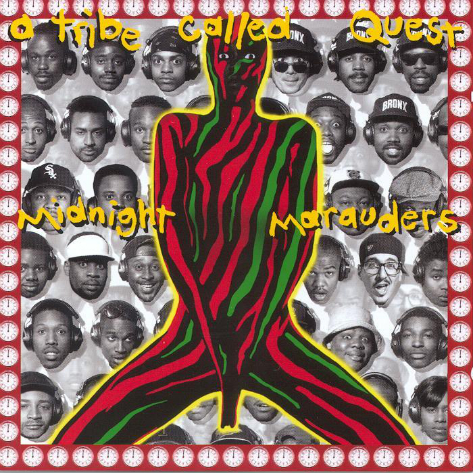 Last month, Q-Tip, Phife Dawg, Ali Shaheed Muhammed and Jarobi took to the stage in at the Barclays Center in Brooklyn, then again at Madison Square Garden in Manhattan, as the opening act for two of Kanye West's NYC Yeezus Tour stops. Collectively known as A Tribe Called Quest, it was fitting that the group's triumphant return to the stage coincided with the 20th anniversary of their seminal release, Midnight Marauders. The performances were also important for another reason -- they marked the last time that the guys would perform together as a group. Despite the fact that they had made this declaration at various times throughout their nearly 30 year existence, it seems that this time, they really mean it.
Center

The group's tumultuous relationship with each other since the release of Midnight Marauders has been well-documented. There's Michael Rappaport's acclaimed, yet sobering documentary, Beats, Rhymes & Life: The Travels of A Tribe Called Quest. And then there are firsthand accounts, where the members refused to even be in the same room together, much less perform as the lighthearted unit they once were. Despite their rocky relationship with one another, one thing remains -- as a group, they made classic projects like Midnight Marauders.

Released the same November day that Wu-Tang Clan released their classic Enter the Wu-Tang (36 Chambers) and in the same month as Snoop Doggy Dogg's Doggystyle, ATCQ managed to produce an effort that though decidedly New York in vibe, still lay somewhere in between their more aggressive counterparts. They were equal parts street, conscious and smooth, appealing to the streetwise, the educated, the female persuasion and everybody in between. While they had established strong fanbases with their first two releases, 1990's People's Instinctive Travels and the Paths of Rhythm and 1991's The Low End Theory, Midnight Marauders gave them both the critical and commercial success they deserved. The album presented a more cohesive and polished ATCQ that had stepped beyond the confines of their Native Tongues cohorts.

Any discussion about the album can't really begin without discussing its epic cover. If you were anything like me, then countless hours were spent trying to spot and identify every smiling, headphone-wearing rapper pictured on the front and back covers without reading the list. The craziest thing is that the cover almost never was. Q-Tip had initially pitched two other artwork concepts, before settling on the now-iconic imagery that we all know and love. Conceived by Jive Record's then-art director Jean Kelly, the who's who of '90s hip-hop were individually photographed before being Photoshopped around Tribe's infamous painted lady. However, once the album was unwrapped, it's packaging took a backseat as listeners got swept up in the full Midnight Marauders experience. Listeners were guided through its entirety by the soothing, yet robotic voice of the CD's tour guide, a clever tool used to do everything from explaining the album's title to citing AIDS statistics at a time when the hip-hop community was more than happy to turn a blind eye to the growing epidemic.

The album's first single set the guys up for the massive success that had awaited them. Featuring a sample of Weldon Irvine's "We Gettin' Down" and a hook provided by De La Soul's Trugoy, "Award Tour" remains the group's highest charting single to date, finding crossover success across several Billboard charts. Truthfully, my reasons for falling so hard and fast for this song extended beyond the fact that track was dope and that Q-Tip and Phife Dawg flow bounced off each other with ease. For me, I was instantly hooked just based on the fact that they shouted out my hometown of New Orleans, and the South in general, which were often overlooked by mainstream hip-hop. It felt good to be acknowledged, if only in a random shout out.

ATCQ then followed up on the single's success with the smooth and sexy "Electric Relaxation." Both seductive and witty, the song surely earned them countless female fans as they turned their attention to the ladies. Their sensitive approach worked, as the song also climbed the charts and is still considered one of their signature singles to date. The next single from the album was "Oh My God," a hard driving tune with Busta Rhymes on the catchy hook. In another bold move that I feel is indicative of ATCQ's ability to think outside the box, they sample the same Busta Rhymes' hook just a few songs later on "God Lives Through."

Two decades after its release, Midnight Marauders album cuts still elicit the same response as they did back then. "Award Tour" can still move a crowd, while "Electric Relaxation" continues hip-hop seduction at its finest. The album's impact is still being felt today. To commemorate the album's anniversary, Wax Poetics recently released a special mix filled with album tracks and many of the songs they sampled. Despite releasing two more studio album's later, Marauders would prove the height of the dizzying roller coaster ride of fame for the group. They would later officially part ways a mere five years later. Q-Tip would go on to find critical success as a solo artist and producer, while Ali Shaheed Muhammed went on to cofound another successful group, Lucy Pearl. And while Phife Dawg's health has suffered tremendously as a result of his ongoing battle with diabetes, he also ventured out as a solo artist. Regardless of if the guys' latest departure from the stage is indeed ATCQ's final bow, their
legacy remains intact thanks to stellar offerings like Midnight Marauders.