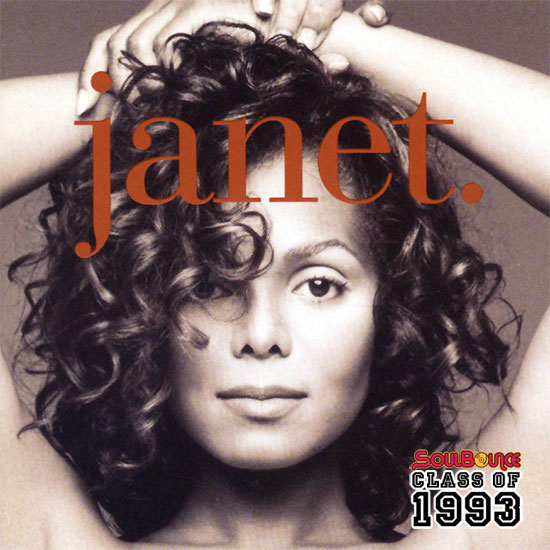 As cultural icon Janet Jackson was nearing the end of Rhythm Nation 1814's reign over the pop and R&B charts, an interesting thing was happening. Her contract with A&M Records was near its completion and, because she is, after all, Janet Motherf--king Jackson, she found herself the subject of an all-out bidding war between record labels. Eventually signing with Virgin Records for a then-unprecedented $40 million contract, she set to work on what would become her career-defining moment, 1993's janet. Whereas Rhythm Nation was all about social injustice and the importance of education (at least half of it was, the other half was all about love and a good time), janet. — read: "Janet, period." — was about the artist-in-progress. Here was a 27-year-old woman with a lot of expectations placed on her shoulders taking an unexpected turn and embracing her sexuality, sensuality, politics and womanhood. Coupled with her return to acting in that year's Poetic Justice, the album set Janet up to dominate the majority of 1993 and solidify why she, though a member of the Jackson dynasty, was also a superstar in her own right.

Rhythm Nation's final video, "Love Will Never Do (Without You)," was the first inkling the public got that we would see a different side of Janet on the next set. But it was lead single "That's the Way Love Goes" that showed just how different janet. would be. It was a slow burn of a groove led by her sensual whisper: "Like a moth to a flame burned by the fire..." From there, she and partners in crime Jimmy Jam and Terry Lewis borrowed the slinky guitar from James Brown's "Papa Don't Take No Mess" to illustrate a much more sensual side of Miss Jackson than we'd ever seen.

But just as soft and sensual as "That's the Way Love Goes" was, second single "If" was the flip side of that coin. About lust, pure and simple, the song was sexually aggressive and demanding, which was underscored by the song's electric guitar, hard-hitting drums and a sly sample of The Supremes' "Someday We'll Be Together." Here was Michael Jackson's baby sister not only singing about "the things I'd do to you" but describing just how much she likes to go "down-da-down-down-down-da-down-down." Pearls were clutched and tongues were wagged, but nobody dared to turn it off. And why would they? "If" was dance floor ready pop/R&B that spoke not only to the changing times, but to the changing artist. Gone was the tomboyish, head-to-toe black that covered Janet's body in the '80s. Here to stay was the midriff-baring and feminine grown woman that could be the subject of many fantasies but wasn't afraid to take charge and let you know her own.

janet. for the most part continued to strike the dichotomy between Janet's soft and aggressive sides, cooing and moaning one minute and teasing and taunting the next. But, if you thought that the album was all about Miss Jackson's libido, you thought wrong. Though the bedroom was heavy on her mind, Janet still found moments to sing fluffy anthems about love ("Because of Love"), tell a man where he could get off (the operatic "This Time"), wax poetic about a love lost ("Where Are You Now") and have fun hanging out with friends ("Whoops Now"). But she also branched out beyond the romantic, especially with the Chuck D-featuring "New Agenda." Equal parts a celebration and a call to action, the track found Janet embracing her blackness, womanhood and a hip-hop aesthetic while calling for an end to racial and gender discrimination.

As well, janet. wasn't afraid to try on a few genres for size. For the pulsing "Throb," Janet became a house music diva. For "Funky Big Band," her tribute to Harlem's famed jazz club Lenox Lounge, she did an updated take on jazz, even daring to scat. And there's "What'll I Do," her update on a '60s soul stomper originally performed by Stax Record's Johnny Daye. But, just in case you didn't think that Miss Jackson was versatile after all that, she threw in bossa nova-styled babymaker "The Body That Loves You" in for good measure.

Finally, janet., like all post-'85 Janet Jackson albums, ushered in another era of iconic music videos. They were bold, iconic pieces that have been aped a million times over since they originally dominated the screens on MTV. Take the laid-back bohemian vibe of "That's the Way Love Goes," the futuristic voyeurism of "If," the taunting playfulness of "You Want This" or the Technicolor sensuality of "Any Time, Any Place." Are these not themes that we have seen repeated endlessly since in the works of Ciara, Mya, Britney and Christina since? Not to mention, Tina Landon's crisp choreography during the janet. era made her a household name and a go-to for any pop starlet who wanted to move like Janet did.

The chart and cultural impact of janet. was far-reaching. The album launched a whopping nine singles internationally, with many landing in the Top 10 of charts all over the world. It also showed female stars that there was a lane to be sexy somewhere between her own chaste "Let's Wait Awhile" and Madonna's full-out erotic assault. And if you think that future generations didn't follow this blueprint, you're sorely mistaken. Look no further than Beyoncé's recent self-titled album, where the once very private star has finally opened up to express her sexual and sensual sides while also embracing her womanhood (sound familiar yet?). It's easy to see, then, that in SoulBounce's Class of 1993, janet. is clearly the valedictorian. Now bow down to that.