SoulBounce’s Class Of 1993: Lenny Kravitz ‘Are You Gonna Go My Way’ 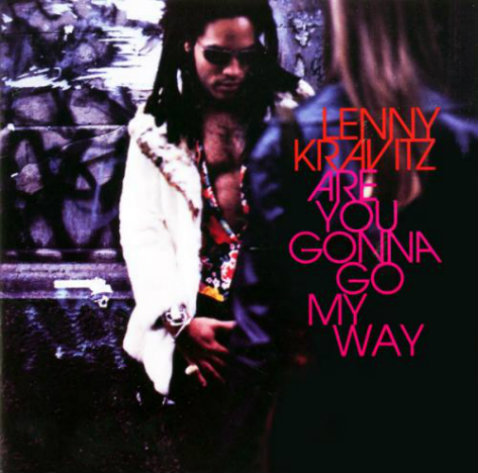 Prior to 1993, my knowledge of Lenny Kravitz was fairly limited to more of the scandalous rumors surrounding his personal life than to his actual music. I knew that he was allegedly to have been partially to blame for the rift between his actress ex-wife Lisa Bonet and comedian Bill Cosby, which led to her unceremonious exit from both The Cosby Show and A Different World. I knew that the tabloids also said that their marriage ended amidst rumors of infidelities and drug abuse. But aside from his decidedly soulful 1991 breakup ode "It Ain't Over Til It's Over," I knew little about his past two albums, other than the fact that they were usually filed away in the rock section at my local Sam Goody, a section which I usually marched past on my way to the R&B section.

I remember the first time that I saw the video for his single, "Are You Gonna Go My Way?" Admittedly, it wasn't even Kravitz himself that made me sit up and take notice that day in February 1993. Initially, it was the image of an afro'd Cindy Blackman absolutely serving it on the drums that caught my attention. However, it wouldn't take long before I was drawn in by the song's irresistible power. Beyond the slamming drums lay a driving electric guitar riff that set the perfect stage for Kravitz's penchant for classic rock. The influence was obvious; it didn't take a lot of creativity to imagine the song in the hands of Jimi Hendrix. As a hormonal teenaged girl, it also didn't take much for me to look beyond the dreads, the endless array of suede hip-hugger bell-bottoms and platform boots to see that the man was smoking hot. And just like that, I got it. I got Lenny Kravitz.

It seemed the rest of the world had finally gotten him, too. While his previous albums, 1989's Let Love Rule and 1991's Mama Said were successful in their own right, it would be the single and album of the same name that would make him the rock star he had set about to be. The song and its kick-ass video would help him earn an MTV Video Music Award for Best Male Artist. Following its March 1993 release, the platinum-selling album became his first top 20 album in the United States, while reaching the top spot in both Australia and the UK.

While it would have been easy for him to follow up with another free-living rock anthem, he instead slowed the tempo quite a bit, releasing "Believe" as the album's second single. Decidedly more mellow than its predecessor, "Believe" and its contemplative lyrics did little to halt his momentum as it he proved that he was more than just a rocker at heart. The album's next single "Heaven Help" revealed still another side of Kravitz, that of the balladeer who like so many of his fans was on a search to find lasting love. Much of what made the album such a massive success was that Kravitz proved that his sound, with all of its complexities, could not just be pigeon-holed into one genre. In addition to the very obvious rock influences, traces of reggae, funk and even gospel music were apparent on the album. For the soul fan, like myself, songs like "Sugar" instantly resonated with me thanks to its Earth, Wind and Fire-esque horns and coyly sensual undertones. Regardless of which Lenny you preferred, dealing with the universal topics of love, faith, unity and heartbreak ensured that this was an album that could draw listeners in one way or another. To put it simply, there was something for everybody here.

One of the best things about Are You Gonna Go My Way is that all these years later, I can still revisit it and find new things to discover to appreciate. As a 15-year-old, "Sister," a seven-minute long opus, felt both drawn out and slow to start to me. However, revisiting it as an adult, I found myself blown away by the musicality and the overwhelming sensitivity found in his lyrics. Better still, old favorites such as the album's title track, "Is There Any Love In Your Heart" and "Sugar" sound just as good as they did then. It also opened up my previously closed ears to the man who would become one of my favorite artists ever. I backtracked and purchased Let Love Rule and Mama Said, in addition to adding his subsequent releases to my ever-growing collection. To commemorate the album's 20 year anniversary, Kravitz invited fans to break out their best air guitar and drum performances for his recently released fan-generated lyric video for "Are You Gonna Go My Way," in addition to releasing an expanded edition of the album.

Just as his musical style can't be limited to one genre, Kravitz has proven that his talents also can't be limited to one arena. He's added actor to his list of accomplishments, with supporting roles in such box office hits as Precious, The Butler and The Hunger Games movie franchise. He's also added designer to his repertoire, but not one of the fashion kind. Fueled by his love of decor, he launched his Kravitz Design firm with plans to design furniture, hotels and homes, counting the set of The Queen Latifah Show as one of his latest projects.

Kravitz's current path seems a far cry from the musician that myself, along with many others, were just discovering 20 years ago. Regardless if it made you a lifelong fan or just a fan of the one song itself, one thing can't be denied: Are You Gonna Go My Way transformed the boy from Brooklyn into a bonafied rock star.

Lenny Kravitz Are You Gonna Go My Way [Amazon][iTunes][Spotify]