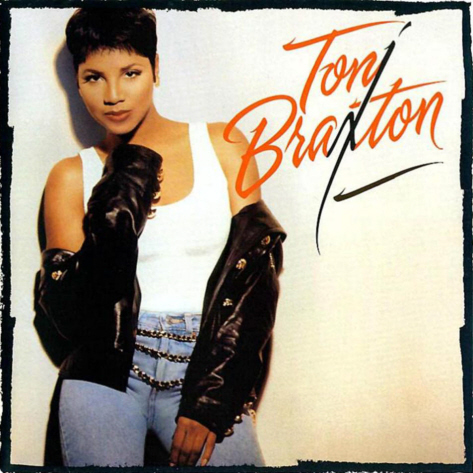 Anyone who hasn't been living in a fortress of solitude knows all about the Braxton family. For two years and three seasons, we've become a fly on the wall through the peaks and valleys of what is their showbiz familial reality on the WE tv show Braxton Family Values. At the time, Toni Braxton, the eldest of five siblings was the most prolific member of the family, but during the show's popular run, younger sister Tamar Braxton with her quotable quips ("It's the bomb.com"), ratchet brassy attitude and recent musical comeback, has had her snatching the spotlight to now become the focal point of the clan. So much so that it's gotten people spouting erroneous music factoids. I say this as I was informed by a guy bagging my groceries once that Toni was "just Tamar's sister" and assumed her musical catalog consisted of "that 'Make My Heart' song." Oof. You bet that hurt my heart, soul and hit me right in the "audio diva." It also led me to have a slight blackout right there in the H-E-B's check-out line, because let's just say that I remember Toni Braxton being, well, a little different, a little more prolific and not in any way being negated to the title of "just Tamar's sister."

Around the early '90s, with Whitney Houston, Mariah Carey and a burgeoning Mary J. Blige, the R&B women's platform was expanding with a bumper crop of songstresses that were forging their debuts. One such contender was Toni Braxton, a clergyman's daughter hailing from Severn, Maryland who possessed a powerhouse voice that was similar in alto seduction a la Anita Baker, but had the pop appeal and versatility to make her an effortless cross into the mainstream. This appeal would lead Braxton to three top 10 singles, a #1 charting debut album, plus three GRAMMY Awards -- one being the coveted Best New Artist --- all gathered from her very first album alone.

Coming from a musically inclined family, Braxton cut her chops early by singing in church alongside her sisters. Simply billed as The Braxtons, the group comprised of Toni and her four younger sisters scored a record deal with Arista and released only one single in 1990 named "Good Life." The song and it's b-side "Family" failed to spark but managed to draw attention from former members of The Deele -- Antonio "L.A." Reid and Kenneth "Babyface" Edmonds -- who wanted to sign them to their LaFace label (then a subsidiary of Arista Records). Only there was a slight problem. The label had already filled their girl group quota with TLC, thus the focus went to Toni, who went on to become the first female solo artist to sign to the label. The soundtrack for the 1992 Eddie Murphy romantic-comedy, Boomerang would ultimately become Braxton's breakout, as after Anita Baker passed on the material due to scheduling conflicts Braxton filled in on not one but two tracks. She held her own next to Babyface on their hit duet "Give U My Heart," but the spotlight was fully turned on when she laid into the film's theme song "Love Shoulda Brought You Home," and just as salty as Halle Berry delivered the infamous line in the film, Braxton was also a woman done wrong and when she belted the line it earned her a high placement in the smorgasbord of R&B songstresses to arrive that year.

Like Whitney, Mariah and Celine Dion before her, Braxton's debut album is a meticulously fashioned effort driven by capable producers as a vehicle to properly introduce a brand new voice to the public, and really, there isn't anything wrong with that. It proved to be a winning technique after the well-executed roll-out that led to the success of Whitney Houston in the mid-'80s, but in a lot of ways, Toni Braxton is a Babyface album -- just sung by a woman. Braxton possesses similar diction and style that Babyface is infamous for and shades of it here are kind of hard to ignore. But unlike what was sort of obvious with the female acts Rick James and Prince heralded, Babyface does have moments where he gets out of the way so Braxton can take the reins and make this an album of her own as she does pen and produce two tracks here. Still if Babyface, with his knack for writing songs and production punch, was searching for his Mary Jane Girl or Denise "Vanity" Matthews, he found it in Braxton and his fine-tuning that vision is all on Toni Braxton.

Toni Braxton is pretty much how you want a '90s R&B album to be. You've got "my man done me wrong" anthems, sultry sexual healing numbers, and of course a woman who is singing her Guess jeans off. Hearing it as a young girl way back when, I knew boys had cooties, but I didn't know they were going to make me hate love songs on the radio, get mad when love didn't bring them home for seven whole days and cause me to reach for a respirator when they went away, but with this album, the big sister in my head Toni just opened my eyes to what would be my future exile into guyville. As downtrodden and longing as these songs are, "Another Sad Love Song" is just an R&B classic in my book, filled with romantic angst that richly flows into "Breathe Again," another classic and gorgeously performed number that is haunting in all the right places. Perfect songs they are. Out of the prominent singles, I find "You Mean The World To Me" a bit on the schmaltzy side, but Toni raises its slush by another rousing vocal performance that is unforgettable.

Little splashes of New Jack and pop are included in "Spending My Time With You" and "I Belong To You" and they are fun filler, but it's really the mid-tempos and ballads where Toni owns. "Candlelight" is sultry and melodic as is the saxophone-led "Love Affair," and, though considered filler, they still charm. One overlooked single, "Seven Whole Days" featuring backing vocals from Braxtons sisters, is a multi-layered blue lights in basement jazz track, that really plays into the Anita Baker comparisons. Another favorite of mines is "How Many Ways" as it has a atypical arrangement with choppy tempo changes and a groove that is on lock. And I'd like to give a little praise to the music video as it features Toni getting cozy with none other than Shemar Moore, proving once again why the '90s had the best male candy in music videos ever.

I'm going to gab about "Love Shoulda Brought You Home" one more time as it is by far my favorite moment here. It's just a first-rate ballad and Braxton stomping her vocals all over it gives me life every single time I lay ears to it, and its a performance that warrants you to grab a hairbrush and sing a long with it...not that I do that sort of thing, but yeah, *whistles*. As it was her official debut single, Braxton proves completely with this track why she has one of the great voices in the business, and to this day, I still find it my absolute favorite of her songs, even besting her tour de force of "Unbreak My Heart."

Toni Braxton may have wiped the floor clean of competition with this album, but she wasn't done yet. In 1996 she released her follow-up, Secrets to even bigger success and an even more prominent role in production. Braxton was still ablaze when the 2000s rolled in as she earned her sixth GRAMMY award for single "He Wasn't Man Enough For Me," and she began an acting career by taking to the Broadway stage with playing the first ever African-American Belle in Disney's Beauty & The Beast and appearing in films like 2001's Kingdom Come. By the later 2000s though, Braxton's career cooled down as her follow-up albums, 2003's More Than A Woman and 2005's Libra, while fan favorites, failed to gain traction. Tragedy would strike in threes as a divorce from Mint Condition's Keri Lewis, a filing for bankruptcy and later a diagnosis of lupus would roll out in the coming of years, forcing Braxton to take a break from music altogether. Braxton has managed to coast through those speed bumps with aplomb as in 2010 she returned and released her sixth album, Pulse, and while a minor success, the singles, "Hands Tied" and "Make My Heart" brought her back to the singles chart. We can also look forward to the coming year as after 21 years of artistic separation, she'll be reuniting with the man who played a huge part in her fame as she'll release conceptual joint effort, Love, Marriage & Divorce with Babyface in the early part of 2014.

Braxton clearly has a career that isn't anything to sneer about or even forget (looking at you grocery check-out guy), but sometimes I feel that Toni Braxton often does get lost in the conversation when we're talking about singing divas of her ilk. Thankfully, Toni Braxton is a true reminder that like Whitney and Mariah, she was able to glide in and out of R&B, adult contemporary and pop without any glitches and along the way change the crossover game as we see it today. Her staying true to the root of soul and sensuality, all without having to compromise herself, is also admirable and why after 20 years of shelf life Braxton's debut remains one of my all-time favorites and is one of the classiest and most essential moments in the '90s R&B cannon.