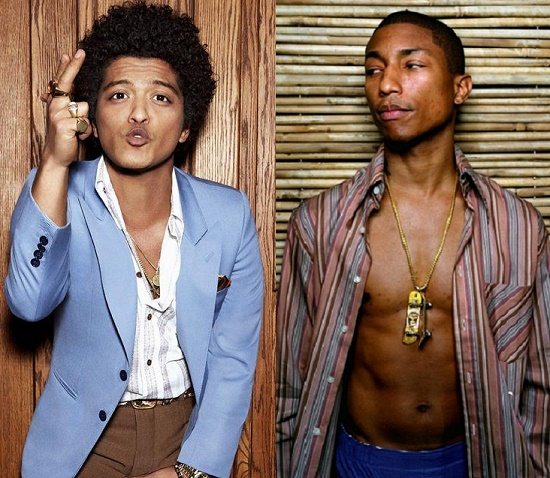 Bruno Mars will play for his biggest audience ever when he takes center field at New Jersey's Met Life Stadium  for the Super Bowl halftime show on February 2nd (for which he'll be accompanied by none other than the Red Hot Chili Peppers). But that doesn't mean the show is going to end for him, in fact it'll be just beginning. The crooner is set to embark on yet another leg of his Moonshine Jungle World Tour, and he's bringing along none other than our Man of the Year Pharrell Williams.

Pharrell, who appeared on the remix to Bruno's latest single "Gorilla,"  will be joining Bruno for seven performances (two nights at L.A.'s Hollywood Bowl, two nights at NYC's Madison Square Garden and dates in Toronto, Montreal and Ottawa). As well, Bruno has also enlisted SoulBounce favorite Aloe Blacc to support him on multiple tour dates during his North American leg. Sounds like it's going to be a show to remember.

Tickets for the show go on sale Monday, February 3rd, so you'll be able to order them soon after he exits stage left at Super Bowl XLVIII.