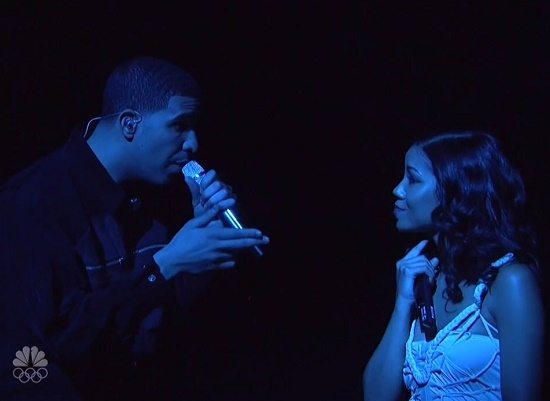 For the first time in a long time, Saturday Night Live was must-see TV this past weekend. First, Saturday's show was the first time a black female cast member would grace the stage in nearly seven years and folks (read: Black Twitter) were interested in how the newest black featured player, Sasheer Zamata, would be used. Secondly, Drake (who was actor on Canada's Degrassi before his rap career kicked off) pulled a Justin Timberlake and was the night's host and musical guest. For the most part, the two did fairly well, even coming together for a few of the night's best moments (the "Resolution Revolution" skit was pure genius). But it was still Drake's night, and while he mostly killed his sketches, his performances were just a little odd. Still he managed to give SoulBounce fave (and recent SoulBounce Remixed subject) Jhené Aiko some shine with his mashup of his hit songs "Hold On (We're Going Home)" and "From Time." Bathed in blue light, the twosome made cute for the cameras as Drake rapped and Jhené cooed. Even though he threw in the awkward "Tell Lorne cut to commercial break love, so we can make love" toward the end, the spell that Jhené helped him cast was still intact.


TAGS:  drake, jhene aiko, justin timberlake, sasheer zamata, saturday night live
Previous: Disclosure & Mary J. Blige Have A Performance ‘For You’ Next: Liv Warfield Keeps The Funk Honest On ‘Why Do You Lie’