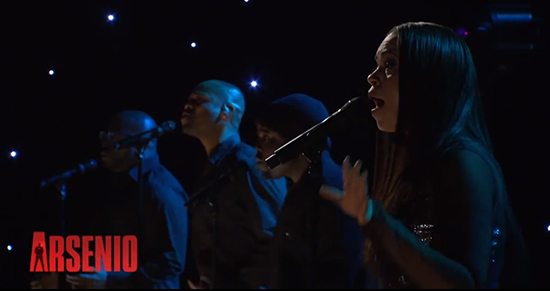 Last Friday night Faith Evans dropped by the set of The Arsenio Hall Show to set the stage ablaze with a fiery rendition of her most last hit single “Tears Of Joy.” Evans came prepared and played no games as she belted out the soulful slow jam, which was originally released in 2012 on the currently GRAMMY-nominated R&B Divas album. She has long been infamous for her legendary vocals, but it seems as though the New Jersey native and former First Lady of Bad Boy Records is demanding her respect this year as she incites phenomenal stage moments such as this one. Along with preparing to attend the 56th Annual GRAMMY Awards this weekend, Faith has been in the studio piecing together her new album Incomporable and we certainly can’t wait to hear what’s to come.


TAGS:  arsenio hall, faith evans, The Arsenio Hall Show
Previous: Jhené Aiko Makes Her ‘Late Night’ Debut With ‘The Worst’ Next: Morning Soul: We Should Do Lunch Or Dinner Sometime