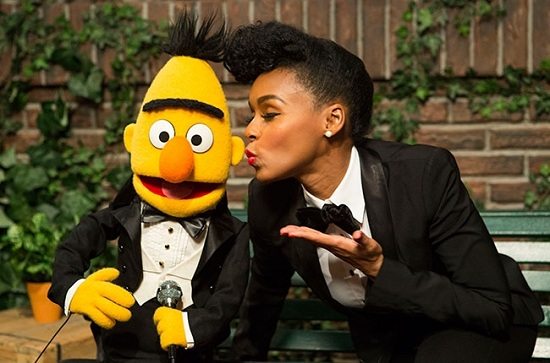 Janelle Monáe has always been a character, so it's only fitting the electrifying lady made a stop on one of the words most famous addresses: Sesame Street. The entertainer was on hand to film an episode for the classic education show's 45th season, which will premiere this September. Luckily, the folks at Billboard.com were on hand to catch Miss Monáe in action as she performed a new original song, "The Power of Yet," for the Muppets on the show's set. "I am so excited to be living one of my dreams -- to be here on Sesame Street," Janelle said of the experience. "I'm here because I am teaching everybody on Sesame Street the importance and the power of 'yet.' Never, ever, ever give up because there's so much power in 'yet.'"

Billboard also caught up with Sesame Street's music director Bill Sherman, who told them a bit about the process of creating the song. "We're trying to write for everybody," he said. "By using current pop artists on the show, it opens kids up to all those sounds. And it opens up those artists to a generation they may not have gotten to." It sounds like Janelle's appearance on the show will very much be an uplifting one. Check out Billboard's featurette on Janelle's visit right here and keep your eyes peeled for when Janelle finds her way to Sesame Street later this year.