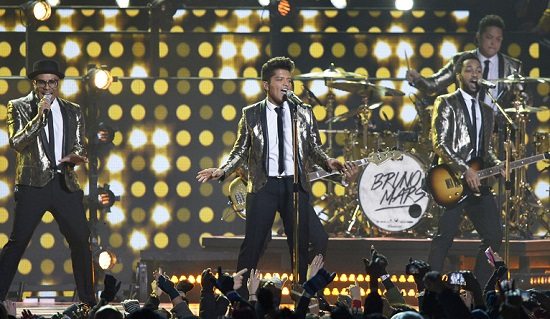 Millions of people tuned in to watch the Seattle Seahawks pretty much trounce the Denver Broncos in a 43-8 victory during Super Bowl XLVIII (or to watch the new crop of million-dollar commercials that usually debut during the big game). But for music lovers, the main reason to watch was to watch diminutive dynamo Bruno Mars do his thing during the halftime show. And while he had his share of haters when he was announced as the halftime performer last month, he shut them all down the minute he hit the stage and dished up a healthy serving of soul on a sizzling hot platter . Starting off with a chorus of ethnically diversion children singing a bit of "Billionaire," it then launched into Mars doing a blistering drum solo before hitting the stage with his band for "Locked Out of Heaven" and retro R&B cut "Treasure." That segued into Doo-Wops & Hooligans' "Runaway Baby" before he brought out the legendary Red Hot Chili Peppers for a rousing take on their hit "Give It Away," which the rockers, led by Anthony Kiedis and bassist Flea (now in their 50s) ripped like it was 1991. To close the show, Bruno trotted out his heartstring-puller "Just The Way You Are" one more time, this time with an introduction from a few members of the armed service dedicating the song to their loved ones. It was just a tad sappy, but a fitting end to such a dynamic set. Writing about it can't do it all justice, though, so check it out right here and prepare to be wowed all over again.