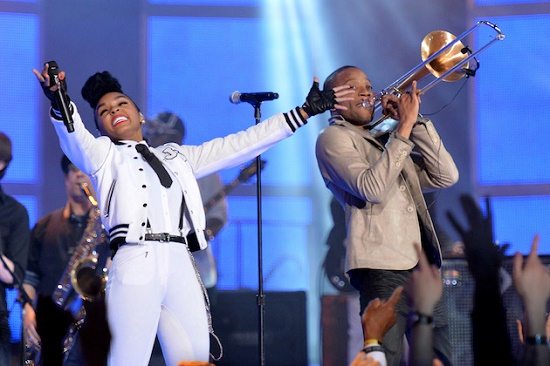 While the battle between the East and West All-Star teams was the main focus at Sunday night's NBA All-Star Game in New Orleans, you'd be forgiven if you paid more attention to the game's halftime show. That's because the star power was cranked up to 11 with the likes of Trombone Shorty and his band Orleans Avenue, New Orleans legend Dr. John, Gary Clark, Jr., Electric Lady No. 1 Janelle Monáe and the legendary Earth, Wind & Fire. While putting a performance together with this cluster of stars would seem a formidable task, somehow they made it all work mostly seamlessly.

Hometown boy Trombone Shorty opened with a rousing performance of "For True," where he showed off his vocals along with his exceptional trombone playing skills. The spotlight then turned to Dr. John, who performed the New Orleanian classic "Iko Iko." Next was blues man Gary Clark, Jr. who did a soulful rendition of his "Bright Nights." But the star wattage really turned up when Ms. Monáe took to the stage for her "Electric Lady." She shook and shocked the crowd as Gary, Dr. John and Trombone Shorty all backed her brilliantly. They then all came together along with EWF for an extra special version of the '70s funk group's "Shining Star" with Janelle sharing lead vocals with Philip Bailey.

Hands down, it was a performance for the ages and one that was sure to be remembered by all who watched and attended. If you missed it, check it out right here.