Pharrell Makes The Crowd ‘Happy’ At The NBA All-Star Game 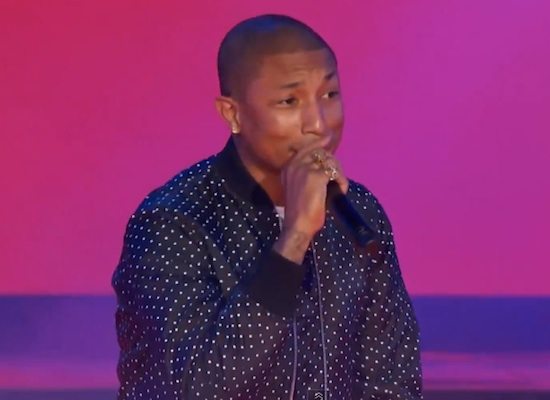 While I'm sure some people show up for NBA All-Star Weekend to actually take in some guys running around trying to throw a ball into a net, the only thing I'm usually checking for is the musical acts. This year was no different with the man of the hour, the ageless Pharrell Williams taking center stage to kick off the weekend's main event, the East vs. West All-Star Game. After being introduced by proballers Chris Paul and LeBron James, Pharrell breezed through his lengthy catalog of classics, including "Fronting," "I Just Wanna Love You (Give It To Me)," "Blurred Lines" and "Rock Star." He was also joined onstage by a few of his celebrity friends including Nelly ("Hot in Herre"), Snoop Dogg ("Beautiful") and Diddy and Busta Rhymes on an NBA-themed reworking of "Pass the Courvoisier" ("Pass the Rock This Way"). Pharrell's performance was definitely one of the highlights if for no other reason that it provided a reminder that before Skateboard P rediscovered disco and Marvin Gaye, he ruled the hip-hop charts alongside his Neptunes production partner Chad Hugo (though how weird was it to see Hugo reduced to a keytar-playing member of Pharrell's backing band?). At any rate, a fun time was had by all during the almost half-hour performance, which included the actual NBA player introductions and a sorta costume change that saw Pharrell don a red version of his now-infamous buffalo hat. He ended the performance on a high note with his most recent hits, Daft Punk's "Get Lucky" and his own infectious single, "Happy." Regardless of which side of the fence you are on when it comes to his vocals, Pharrell proved that he will make you move one way or another.