Was Mariah Carey’s BET Honors 2014 Performance A Gold ‘Mine’? 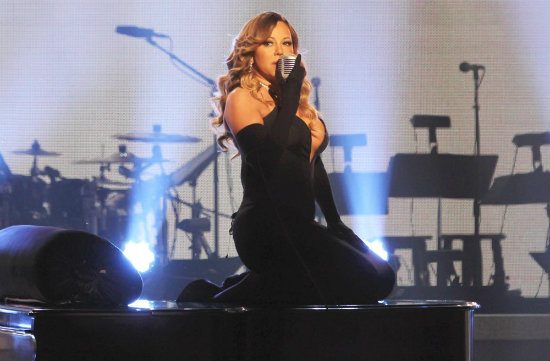 First, let's start with the good. BET Honors has become a much-anticipated event that weaves together stories of inspiration and great musical tributes into a classy package. This year was no different as performers such as Jennifer Hudson, Smokey Robinson, Janelle Monáe and Karen Clark Sheard got together to pay homage to the likes of the soul music's Aretha Franklin, rapper-turnt-actor Ice Cube, Motown's Barry Gordy and visual artist Carrie Mae Weems. The two-hour event provided a beautiful and poignant celebration of successful African Americans.

And now the bad. Mariah Carey provided one of the evening's few low points. She took to the stage to perform her newest song, "You're Mine (Eternal)." What exactly her appearance had to do with the price of tea in China is beyond me. While the other artists' performances were directly linked to the evening's honorees, Carey's performance felt randomly placed. Her sexy Jessica Rabbit-inspired look felt out of place amidst the rest of the evening's classically black-tie dress code. But perhaps the most disappointing (and noticeable) detail about her performance was that she chose to lip sync. Carey, whose entire career has been built on her powerful pipes and live shows, inexplicably chose to dial it in. It'd be more understandable if there were intricate dance moves that would have impeded her vocal abilities; however, she literally spent the majority of the performance lounging on top of the piano. Save for the fact that at times her ample bosom looked as if they cut off her air supply at times, I had a hard time figuring out the lack of live vocals. The least she could have done was record a live track for what should have been a live performance, right? With a voice as beautiful as Carey's, depriving fans the opportunity to hear that ability live and direct just felt plain cruel.