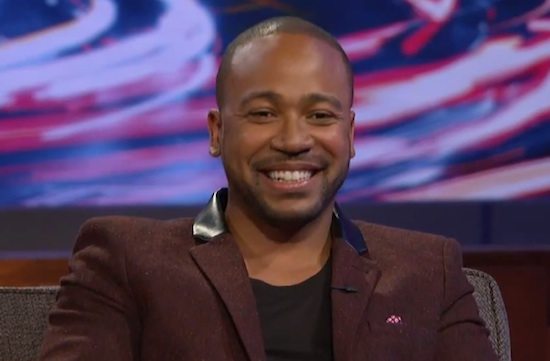 We may currently know Columbus Short as his impeccably dressed character Harrison Wright on ABC's hit drama Scandal, but there's more to this fine specimen than meets the eye candy. Those who've been following Short's career know that aside from being an actor, he's also a dancer, musician and singer. We may never get to see those talents in play on his day job unless Scandal: The Musical ever goes into production, but don't despair because he will be flexing all those skills soon.

Last night on The Arsenio Hall Show in between exhibiting a quick wit and doing an interesting Dave Chappelle impression, Columbus Short announced that his first single, "Gave You," is dropping in two weeks with a music video/short film on the way and an album to follow later in the year, which will double as the soundtrack to a companion film. That's quite ambitious on its face, but it was Short's bold statement to Arsenio Hall that really made eyebrows rise. "I'm coming for Robin. I'm coming for Justin. We taking R&B back," the hyphenate said. Oh word? You hear those shots fired in the shade, Robin Thicke and Justin Timberlake? Your days atop the R&B chart are numbered if Columbus Short has anything to say about it. He is coming to snatch mics, wigs and R&B music out of Caucasian clutches. Well, alrighty then.

We certainly respect Columbus Short's ballsy declaration and can't wait to hear if his music backs up his claims. But there was a little cause for pause, however. Arsenio asked Columbus to sing, and he grabbed the mic, took center stage, donned some round flip-up sunglasses last seen on A Different World's Dwayne Wayne and proceeded to add lyrics to the Arsenio theme music to create a new theme song for the show. It was a silly, lighthearted moment, but not exactly a shining one; if he's going to be out here calling folks out publicly, then he may want to bring his A-game at all times.

So will he be the next Kang of R&B or nah? We'll see and hear if Columbus comes up short (sorry, couldn't resist) or if his music measures up when "Gave You" hits radio later this month.