DJ Cassidy, Jessie J & Robin Thicke Give Us Their ‘Hearts’ 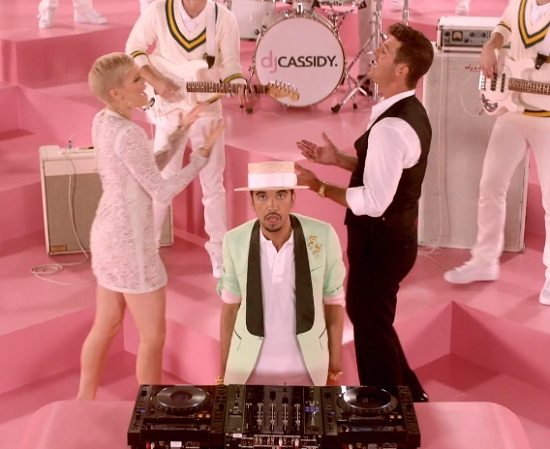 Though we got our first taste of "Calling All Hearts" and word that a video was being made for the song back in December of last year, DJ Cassidy has just decided to release the visuals for our enjoyment. The song, which finds British powerhouse vocalist Jessie J coming together with blue-eyed soulster Robin Thicke, is a bright and sunny throwback to late '70s/early '80s R&B. To mimic that feel, the video goes bright...pink. From the windows to the wall (and the ceiling too), the video seems to be all pink everything, with the only accent colors coming in pops of white, black, green and yellow provided by the wardrobe of the performers. The springtime color palette works for it though, as it gets the viewer in the mood to listen to the fun and funky track and absorb all the fun that's going on.  It also sets the stage for Cassidy's upcoming Paradise Royale, which will feature appearances by a who's who of R&B stars, including Usher, Kelly Rowland, John Legend, Mary J. Blige and Ne-Yo, paying homage to danceable R&B's heyday between 1978 and 1982. Check out the clip right here and be on the lookout for Paradise Royal to drop later this year.


TAGS:  DJ Cassidy, jessie j, john legend, kelly rowland", ne-yo, robin thicke, usher
Previous: Who Comes Out On Top In The Battle Of Accolades vs. The Funk Brothers? Next: Are You ‘With’ Chromeo Or ‘Jealous’ Of Them?