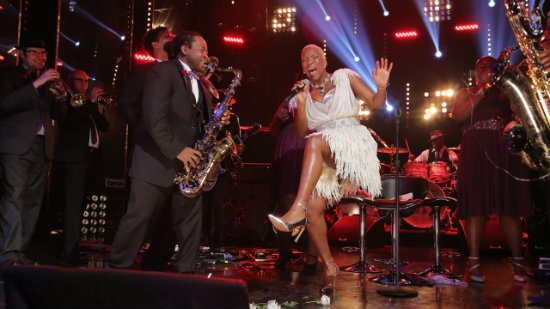 Over the course of his legendary career, Prince has always kept an eye out for great talent, giving then up-and-comers such as Sheila E., Morris Day and the Time, Vanity 6 and most recently, his backing band 3RDEYEGIRL, the chance to shine. Singer and longtime SoulBounce fave Liv Warfield is the latest to get the blessings of his Royal Badness and last night, she got the chance to prove to the world exactly why.

The vocal powerhouse and New Power Generation member hit the stage during her boss man's show takeover of The Arsenio Hall Show where she performed "Soul Lifted." While Prince's signature touch was all over the song, Warfield owned it from start to finish with her rousing performance. Flanked by one of the best horn sections I've heard in a long time in the NPG Horns, Warfield was a vision in white with her killer legs on full display as she showed the audience how its done. She radiated so much sizzling sensuality that she likely could've taken the stage wearing a garbage bag and sweatpants and still had folks eating out the palm of her hand, this writer included. But you don't have to take my word for it; peep the clip below to see why Prince took her under his wing and served as executive producer for her latest album, The Unexpected.