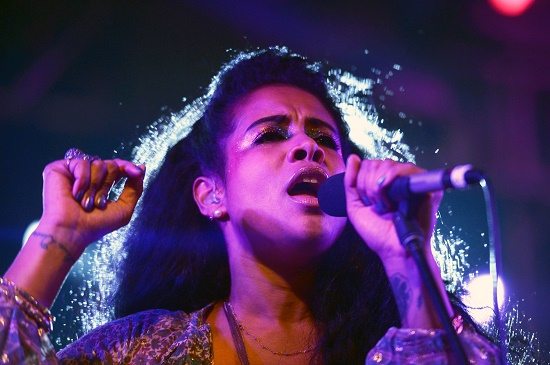 As if I wasn't already feeling some type of way about missing on this year's SXSW, I was further tortured when my Twitter feed blew up with reports on Kelis' debut SXSW set at NPR Music's showcase. According to reports, the "Jerk Ribs" singer was putting a show to remember as she hit notes that she never sings with a live band backing her. But my saltiness has since dissipated now that the good folks at NPR Music have posted up Madame Milkshake's entire Wednesday night set for our viewing and listening pleasure. The setlist veered heavy on new material from her upcoming FOOD, including new tracks "Breakfast," "Cobbler" (where she hits the aforementioned high notes), "Rumble" and "Jerk Ribs." But she didn't forget about her classics, either. "Trick Me," "Millionaire," "Milkshake" and "Acapella" all made appearances. This, along with the singer serving up some of her much-talked-about grub from a food truck at the festival, means pretty much confirms that Kelis was perhaps the hottest — and tastiest — dish served up at the festival this year. Check out video of the full set below or head over to NPR Music's site if you want listen to Kelis work her magic on the SXSW crowd.


TAGS:  kelis, NPR Music, sxsw
Previous: Morning Soul: I Really Want To Come Kick It With You Next: The Trailer For James Brown’s Biopic Will Make You ‘Get On Up’