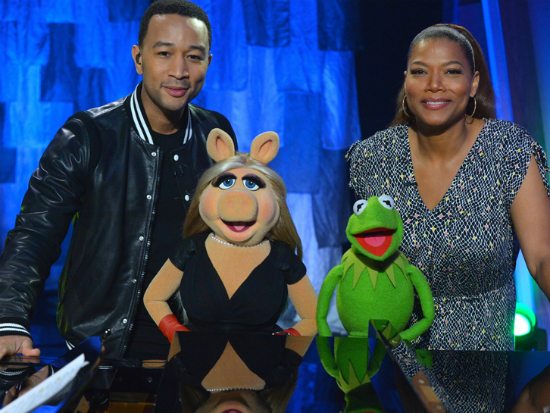 Those fuzzy loveable little creatures known as The Muppets are making a return to the big screen this weekend with the new feature film Muppets Most Wanted. You've more than likely seen stars from the film making the rounds to promote the movie, and today they made their way to The Queen Latifah Show. Queen Latifah welcomed Kermit the Frog and the always sassy Miss Piggy to her couch and laughs aplenty were had before they came back later in the show to join Queen and John Legend on piano to sing the 35-year-old classic, "Rainbow Connection." Kermit shared vocal duties on his signature song with Latifah, Legend and his lady Piggy, and hearts were melted. John Legend also tugged at the heartstrings with a live performance of his current hit song "All Of Me." Warning: You might get in your feelings after watching these videos.