TGT Makes The Ladies Happy With Their ‘Arsenio’ Takeover 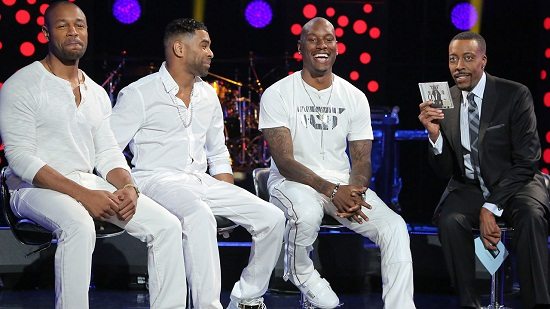 The last time that mononymic R&B supercollective TGT — comprised of Tank, Ginuwine and Tyrese — was scheduled on The Arsenio Hall Show, the trio abruptly canceled their appearance. To make up for the gaffe, the threesome came on the program Monday night to take over the entire hour (they must've got some inspiration from Prince's show takeover earlier this month). When they weren't performing songs from their debut Three Kings (including tracks "Weekend Love," "Take It Wrong," "Sex Never Felt Better" and "Next Time Around"), they sat down to talk with Arsenio Hall about the group's origin, their music and those pesky breakup rumors. They also made the female audience's day by taking time out to answer all of their pertinent questions (like which member is single, what they listen to in the bedroom and if they had proof that they were still keeping things right and tight). Yes, the thirst was strong, and luckily the TGT guys were more than able to quench it. If you happened to miss it, catch up with performance videos and an interview highlight. For the even more goodies from the show, head over to the show's website to see the fellas answer audience questions and even catch a special performance of Ginuwine's "Pony."