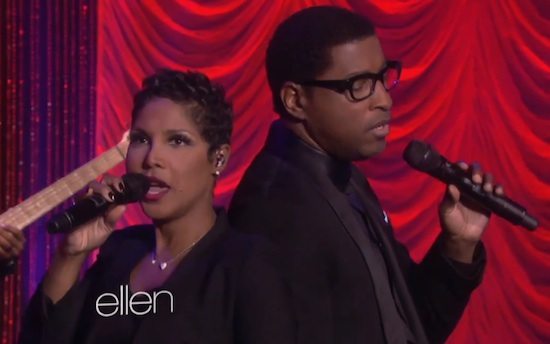 We first heard Toni Braxton and Babyface's "Hurt You" way back in August, yet it continues to be the song that the twosome trot out for almost every television appearance they've done in promotion of their album of duets, Love, Marriage & Divorce. Not that we here at SBHQ are growing tired of the song (though, again, it has been out for over six months), but there are so many songs from the album that deserve some performance shine (like "Sweat" or "Roller Coaster"). That being said, the longtime collaborators brought "Hurt You" to the stage once again for their recent appearance on The Ellen DeGeneres Show. For the most part, it was very similar to their previous performances of the song. However, on key difference here is that Babyface's vocal at times wasn't quite up to snuff. Still, they managed to perform the song ably, smiling throughout most of it. Let's hope that the next time Toni and Babyface grace our TV screens they come with something a little less worse for wear.