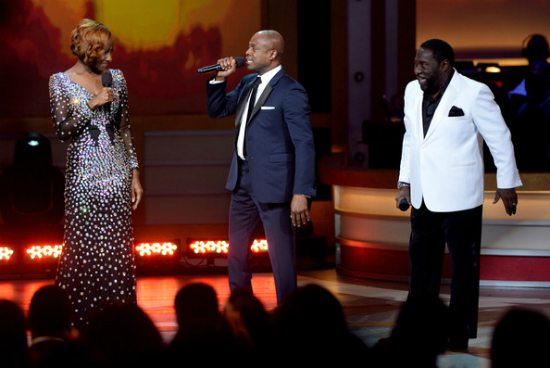 Viewers of BET's Celebration of Gospel 2014 probably needed some time to wipe the sweat from their brows and reduce their heart rates after Erica Campbell's performance and soul man Kem gave it to them -- only to work everyone back into a frenzy later. But while everything was still calm and collected, he exuded cool when he launched into his song "Jesus," which was a bonus cut featuring Patti LaBelle and Ron Isley from his holiday album, What Christmas Means.

Kem held it down superbly before Le'Andria Johnson joined him to take on LaBelle's verses. The Sunday Best winner did Ms. Patti proud, and it was clear why she came out victorious on season three. Ron Isley was also absent from the COG festivities, but it was all good because Eddie Levert swooped in like a soul super hero to save the day. Levert strolled on stage singing from the depths of his soul and into ours. When all three performers started singing bits of The Lord's Prayer together and ad-libbing to the song's end, it was a sight and sound to behold.