Outkast Reunite At Coachella & Despite Some Issues, It Felt So Good 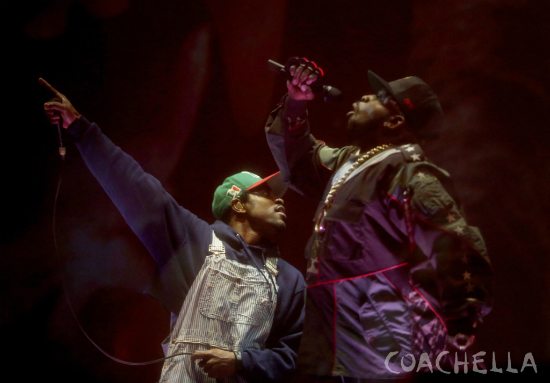 The talk of Internet this weekend was the highly-anticipated and long-awaited Outkast reunion that took place late Friday night on the opening night of Coachella, the annual music and arts festival held in Indio, California. I couldn't even tell you who else was on the bill that day, because the only ones who mattered to me and most of the people I know were Big Boi and his partner in rhyme Andre 3000. This Coachella appearance was heralded as their big comeback and the kick-off to their 40 festival run this year. So did Kast live up to the hype? Well, yes and no.

The good: Seeing Big Boi and Andre 3000 on stage and rapping together again was enough, but then they had Sleepy Brown, Janelle Monáe, Joi, Keisha Jackson and Killer Mike along for the ride and Dungeon Family nostalgia set in. The warm fuzzies began from the first song, the shake what your mama gave you goodness of "B.O.B.," and continued throughout their career-spanning set. They performed hit after hit after hit, taking fans through the past 20 years and reminding us why they are one of the greatest hip-hop groups to ever pick up a couple of mics.

The bad: It was clear that Dre 3K was a little rusty on the live tip, but it wasn't like he was Eddie King, Jr. from The Five Heartbeats after a bender on stage. He was good, he just wasn't great, and he was certainly outperformed by Big Boi, who's been consistently touring over the years. After a few more performances on this festival circuit, Andre should be back to his old self. Let's hope that in future fest appearances that Outkast decides to leave Future off the guest list while they're at it. His surprise appearance to perform three songs lasted three songs too long. Future was unnecessary and added nothing to their show, which lagged when he was on stage with them.

The ugly: So let's talk about that wack ass Coachella crowd, shall we? Man, listen. This comeback performance was totally lost on these hipsters and children whose earliest point of reference for Outkast is probably 2003's Spearkerboxxx/The Love Below, if that. As Kast ran through their catalog of bangers, it was painfully obvious that the audience was unenthused because they were unaware of the greatness that they were privy to witnessing. They may have been the last performers after a long day of concerts in the desert heat with not a shady tree in sight, but Outkast deserved better than that tired, downright disrespectful reception. Trust and believe this would have been a different story had this reunion show kicked off in Atlanta, which in hindsight should have been the plan all along.

Despite this being an imperfect outing for Outkast, Big Boi and Andre 3000 are back and the potential for them to regain their collective greatness is there. Hopefully those who get to witness their live shows will appreciate them.