ScHoolBoy Q Gives Them ‘What They Want’ On ‘Jimmy Kimmel Live!’ 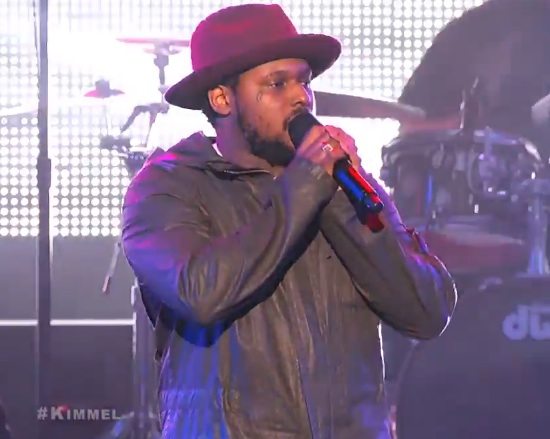 TDE rapper ScHoolboy Q dropped in on Jimmy Kimmel Live! last night. Performing songs from his album Oxymoron (which debuted at number one on Billboard, by the way), the rapper channeled his inner crooner during "Studio" and brought his infectious rebellious energy to the rock-laced "What They Want." Singer and songwriter BJ the Chicago Kid joined him on stage for “Studio,” and we see ScHoolboy Q's mother and her wig were also there to lend support.

Since his solo introduction to the late-night TV circuit in January, performing on Late Night with Jimmy Fallon, ScHoolboy Q has also made appearances on The Arsenio Hall Show and Conan. While ScHoolboy Q is enjoying his reign as the top dawg, he is in the midst of his three-month tour, which started in March inProvidence, Rhode Island, and ends June 1stin Manchester, England. Check out ScHoolboy Q and his Pharrell-inspired hat perform in front of Jimmy Kimmel's all the way live audience right here.