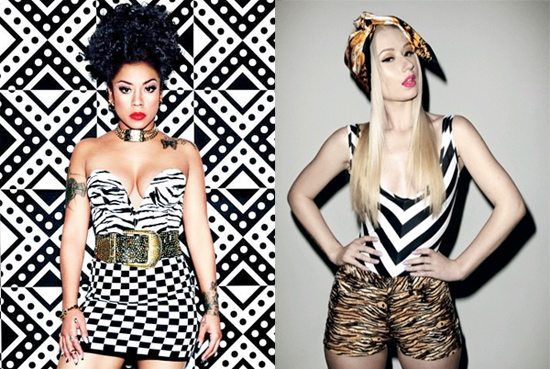 My streak of avoiding hearing Iggy Azalea rap has sadly come to an end. I got hoodwinked and bamboozled into listening to her thanks to this new song with Keyshia Cole, a refake of the Diana Ross hit "I'm Coming Out." About the only things that the original and this flimsy retread have in common are a title, sound bed and bits of the chorus. Otherwise, it's an entirely new song and not a very good one.

The track starts off innocently enough with Cole wailing the song's well-known intro, and she actually sounds great, but then Azalea starts to rap and it's all downhill on roller skates from there. The Aussie femcee makes a comical attempt at trying to mimic The Notorious B.I.G.'s flow from "Mo Money, Mo Problems," which also sampled "I'm Coming Out." She puts the "not" in notorious with her nasally bars, and her rap couldn't end soon enough. When it did, Keyshia had the opportunity to steer this runaway train in the right direction, but it only continued to derail when it turned out that this wasn't a straight-ahead remake but just a sampling situation.

Cole and producer Irv Gotti turn the empowering anthem into another my-man-ain't-shit song, which fits the project that it's taken from -- the soundtrack to The Other Woman, a feature film about a cheating man and the women who catch him -- but they could have left the Ross and Nile Rodgers classic out of this mess.