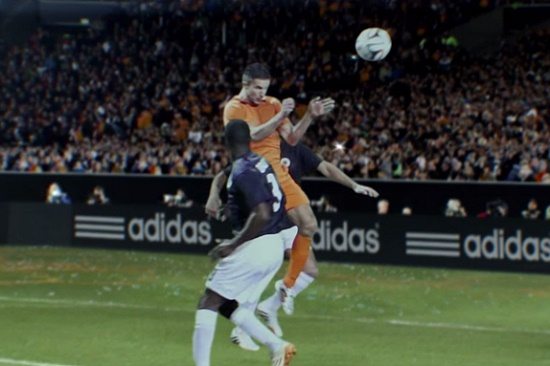 Kanye West's nuptials with Kim Kardashian may have been the big talk surrounding the rapper this weekend, but that wasn't the only reason Yeezy's name was making the rounds. A new spot for footwear brand Adidas dropped and is perhaps the first fruits of the deal between 'Ye and the company since it was announced last year that the two would be collaborating. The soccer-themed "All or Nothing" ad features a number of players getting ready for the impending World Cup as the unreleased Yeezy track "God Level" scores their preparation. A production collaboration 88-Keys, Hudson Mohawke, Mike Dean and Noah Goldstein, "God Level" is reminiscent of tracks from last year's Yeezus with its dissonant electronic backdrop and a snarling Kanye spitting over the track. Unfortunately, because it is a commercial after all, the sample we get to hear of the track is way too short to get a good feel of what's going on. Guess we'll have to wait and see if a full version of the song will surface soon. In the meantime, check the clip and see if you can get on Yeezy's level.