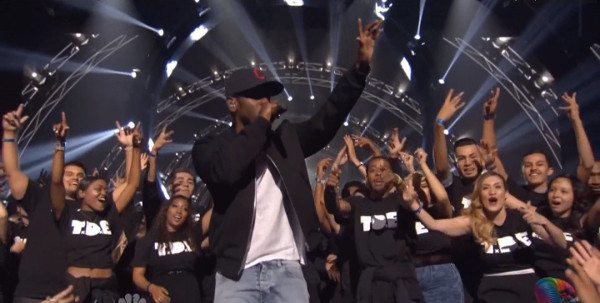 Starting with a genuine introduction from fellow collaborator Dan Reynolds from Imagine Dragons, Compton rapper Kendrick Lamar laid out his LA story on the iHeartRadio Awards stage. After telling a tale of stanning for Dr. Dre and Tupac at the tender age of eight, Lamar performed a tribute to the West Coast greats by rapping over a sample of the west side classic “California Love.” With the audience (including Rihanna) in his pocket, Lamar continued with a tribute to Tupac,  Eazy-E and Nate Dogg, with his single "m.A.A.d. city,” from his 2012 LP good kid, m.A.A.d. city. Lamar was later joined by a legion of fans on stage donning TDE shirts, ending his performance with the audience waving in sync. Lamar not only represented his city and state but brought a passion-filled performance that we can always count on him for.