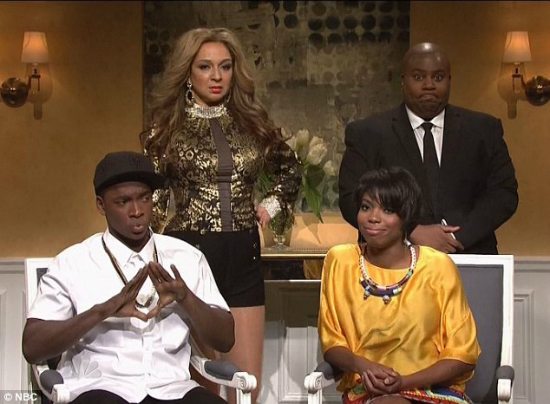 Last week's family squabble seen round the world between Jay Z and Solange while Beyoncé barely batted an eyelash in an elevator made for great fodder for Saturday Night Live this past weekend. The 39th season finale opened with a sketch shedding light on the situation with cast members Jay Pharoah as Jigga, Sasheer Zamata playing Solo and Keenan Thompson in the role of the bodyguard in between the two. Fake Jay and Fake Solange tried to explain away ElevatorGate and convince people that they had ironed out their differences. The sketch was mildly funny until they showed the elevator video this time with audio, and it took a hilarious turn with Solange allegedly trying to get a spider off of Jay Z and giving him a "foot five."

The comedy factor really kicked into high gear when former SNL cast member Maya Rudolph reprised her role as Beyoncé, whom she frequently played during her years on the show, and shut it down. Maya's appearance on Saturday's broadcast was the perfect set up for her variety show that premieres tonight. The Maya Rudolph Show comes on at 10 pm on NBC, and seeing her on TV again this weekend has us anticipating the funny and foolery she'll bring back to the small screen tonight.