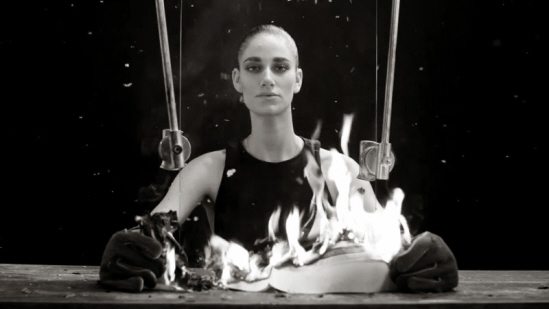 Before last year came to a close NIIA came back to conscious with the mood swing of "Generation Blue" igniting interest in the NYC vocalist and pianist once again. She's now firmly putting her days as a former hook girl behind her (remember Wyclef Jean's 2007 hit, "Sweetest Girl"?) with her latest release, "Seeing Red," where she turns vintage doo-wop soul on its head.

Instead of going for the lovey-dovey schmaltz, "Seeing Red" coasts on brooding synths and heart-stabbing lyrics, cradled by NIIA's soulful tone that in turn evoke shades of '90s R&B harmonies to a tee. It's sweet, but edgy, and not your typical soulful lament as it has a lot of character, hence why I like it so much. NIIA is quite the character herself, as she sat down with Vogue recently to wax on a myriad of topics from word on her upcoming album (which she's working on with SB fave Robin Hannibal), her musical influences, Michael Jackson's hologram and why she thrives better on stage. If you haven't already been scoping her out, NIIA is one to watch for sure.


TAGS:  audio, Niia, robin hannibal, wyclef jean
Previous: Give Anita Nicole A Little ‘Patience’ Next: It Doesn’t Get ‘Better Than’ This SOS Remix Of Paul Johnson