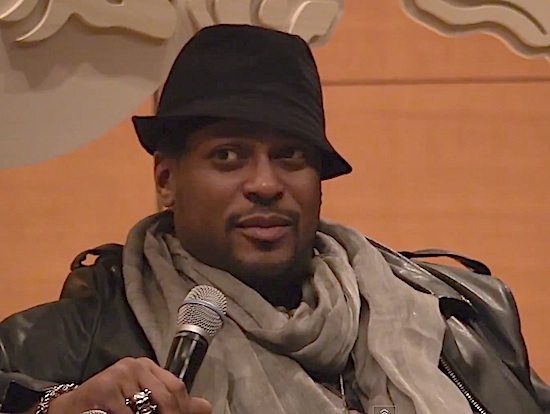 For those of us who weren't blessed to be in attendance at Brooklyn Museum in NYC for Red Bull Music Academy's "A Conversation With D'Angelo" or didn't have the ability to listen live online, RBMA has posted the full video and it satisfies the jones in our bones for the elusive soul savior. Sitting down with author and cultural critic Nelson George, D'Angelo chatted for just shy of 90 minutes about his life, his times, and, of course, his music.

Now, before you even get your hopes up, no, there was no discussion whatsoever about his long-awaited third album. All questions about the collection were off limits. However, what we did get to hear from D'Angelo was a candid discussion where he dropped some golden nuggets about his past (he was first in a hip-hop group named Intelligent Deadly but Unique), his accomplishments (he won Amateur Night at the Apollo singing Johnny Gill's "Rub You the Right Way"), his hometown of Richmond, Virginia and his musical desires (believe it or not he wants to record a gospel quartet album). There were more than a few laughs to be had during the revealing interview that also included a guest appearance from D'Angelo's brother in music Questlove, who he endearingly spoke of using his real name, Ahmir.

D'Angelo exuded confidence, cool and was even comfortable enough to light up a cigarette and smoke on stage. Quite possibly the defining moment of the interview came towards the end when the discussion turned toward the term "neo soul" and Nelson George asked his feelings about it. After initially pleading the fifth, D'Angelo eventually stated, “I never claimed I do neo-soul. When I first came out, I said, I do Black music,” to raucous applause. Watch the entire conversation to hear this man discuss his artistry in his own words, and you'll probably end up clapping, too.