KING Wants To Introduce You To ‘Mister Chameleon’ 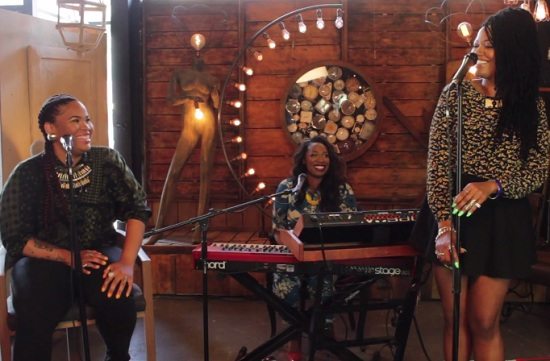 Everybody’s favorite soul sister troupe KING are helping to make this day fly by a bit easier with a brand spankin’ new video. Since the release of “In The Meantime,” the trio has been pretty quiet about their forthcoming full-length debut, but today they have surprised us all with a live rendition of a new song entitled “Mister Chameleon.” With Paris Strother finessing the keyboard as usual, Amber Strother and Anita Bias find the sweetest way to describe the scrub who once did them wrong. “Here’s the story of falling in love with a man of too many shades,” Amber sings. They use their signature harmonies to wish him farewell as they prepare to move on to something better.

While this clip, filmed on location in Los Angeles at the The Lyric & Voila! Gallery, is a preview of what’s to come on their album, it also showcases the magic that this year’s ESSENCE Festival attendees will be fortunate enough to witness. Along with the likes of Amel Larrieux, Alice Smith, Liv Warfield, Daley and Robert Glasper, KING will bless the Superlounge stage in New Orleans in just a few short weeks. Your best bet is to grab a ticket or two to this year’s ESSENCE Festival and keep your ears open for details on KING's highly-anticipated, full-length follow up to The Story.