Mariah Carey Entertains On NBC’s ‘At Home In Concert’ Special 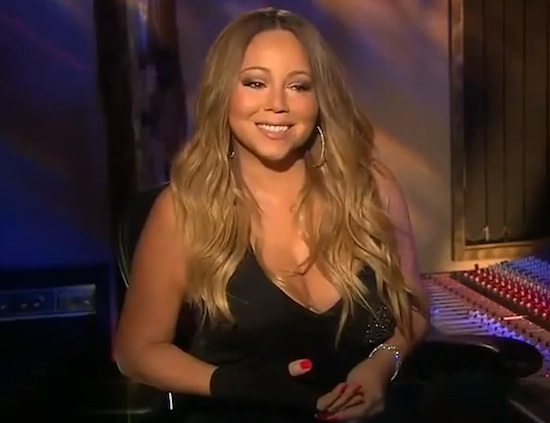 This past Saturday night NBC quietly premiered a one-hour special with Mariah Carey to celebrate the release of her new album, Me. I Am Mariah...The Elusive Chanteuse. Mariah Carey: At Home In Concert with Matt Lauer may have been broadcast with little fanfare, but those few who were tuned in got to see Mariah sit down to chat it up with Matt Lauer and open up her Los Angeles home for intimate performances of songs from the new collection and an oldie but goodie thrown in for good measure.

Mariah was anything but elusive during Matt's Q&A session chatting about everything from the meaning behind the album title to her songwriting to being a chanteuse to #dembabies. Though some of her answers were a bit rambling, it was Mimi being her usual lovably loopy self.

Breaking up the interview segments was Mariah "singing" selected tracks throughout her LA mansion. The first set up was outdoors with Mariah perched on a balcony with her background singers (including Trey Lorenz) joining her to sing her big hit "We Belong Together." It was interesting that for a special to promote Me. I Am Mariah that it started off with this The Emancipation of Mimi throwback, but future performances were all of songs from the new project. Also mixed in was video of her and Wale from TODAY performing "You Don't Know What To Do" and the music video for "You're Mine (Eternal)." We're all for recycling, but this previously released content made the special drag for anyone who's seen it all before and wanted something fresh.

What ended up being the most interesting and endearing part of At Home In Concert was a home movie of Mariah with husband Nick Cannon playing with Monroe and Moroccan while the song "Supernatural" served as the soundtrack. Mimi was in full-on mommy mode while Nick horsed with his son. It was super cute even if it looked totally staged.

Despite Mariah's loopiness, her lip-syncing and the rehashed material, watching Mariah Carey: At Home In Concert with Matt Lauer was entertaining. Will this go down in television history with other TV specials like Motown 25? Not by a longshot, but it was pleasant to watch. If you missed it on Saturday night or forgot to set your DVR to record it, you can watch the entire special online right here.

"We Belong Together"
"Money ($ * / ...)" feat. Fabolous
"You Don't Know What To Do" feat. Wale TODAY performance
"You're Mine (Eternal)" music video
"Supernatural" feat. Monroe Cannon, Moroccan Cannon and Nick Cannon home movie
“Heavenly (No Ways Tired / Can't Give Up Now)”