New Edition Wakes Up Daytime TV With Appearance On ‘The View’ 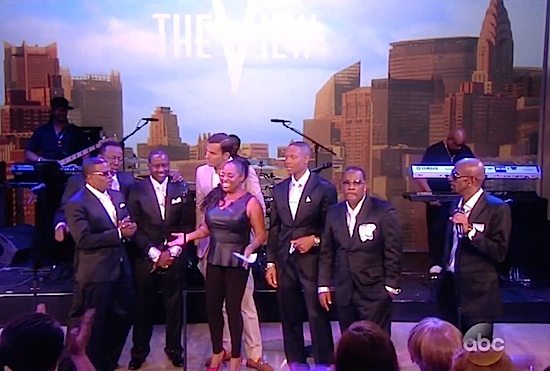 R&B veterans New Edition stopped by The View this morning with all six members and a full band in tow to perform a medley of hits for the in-studio audience and those of us watching on TV. Dressed to the nines in matching dark suits and looking like fly church deacons, Ralph Tresvant, Ronnie DeVoe, Michael Bivins, Ricky Bell, Johnny Gill and Bobby Brown gave it their all with their tight choreography and showmanship overshadowing any less-than-perfect vocals. Performing samples of tracks such as "Candy Girl," "Mr. Telephone Man" and "If It Isn't Love," these cat daddies put on a helluva mini concert.

With more than 30 years in the game, New Edition still has that it factor and the ability to make the ladies swoon. Co-host Sherri Shepherd damn near did just that in addition to screaming and acting a fool when she interviewed the group after their performance. She stopped doing the Running Man long enough and pulled herself together to ask some questions. Of interest to NE fans is that the fellas are in the studio now working on a new album and are carrying out a concert tour with all six members this summer.  Bobby promoted his new line of sauces and Johnny announced that he has a new solo album on the way soon as well. These dudes are not slowing down individually or collectively and are gearing up for the next 30 years together.