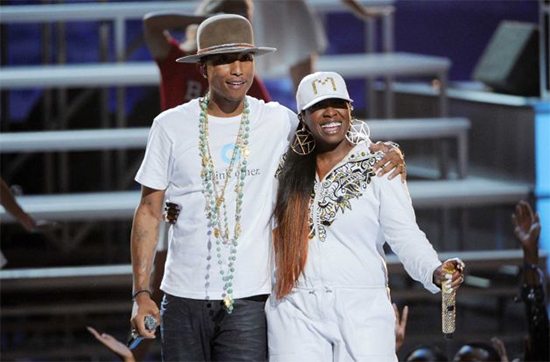 Pharrell Williams has had the music industry in the palm of his hand for the last year or so, so it’s only right that this year’s BET Awards '14 broadcast would kick off with the master producer and falsetto crooner himself. Backed by a bevy of pretty young things rocking “Bae” t-shirts and schoolgirl skirts, Mr. Williams sprung into action and taught us all a lesson while performing “Come Get It Bae” off of his G I R L album. Things got a little awkward when the “Happy” singer struggled to strip off his festive cardigan, but his squad of dimes held him down and kept their preppy choreography going.

Fortunately, Pharrell spared us a Miley Cyrus appearance and went for something a bit more memorable this time around by bringing out his fellow Virginian, hit-maker Missy Elliott. We haven’t seen the seven time BET Award winner on this stage in quite a few years, yet it felt like she never left as we watched her leap down the bleachers in the cleanest white sweat suit and spit bars from her 2003 hit “Pass That Dutch.” After she proceeded to command us all to “pop that” and “jiggle that fat” as only she can, Missy and Pharrell both jumped back into “Come Get It Bae” and rode it out until the wheels fell off.

With a little help from Trey Songz and Chris Brown who both touched the stage later on in the star-studded evening, Pharrell and Missy certainly made sure that Virginia was represented quite well. The only thing missing from this glorified southern family reunion was a dash of Chad Hugo, Timbaland, The Clipse and a little more D’Angelo.