The BET Awards ’14 Go Back In Time With Troop, Color Me Badd & Silk 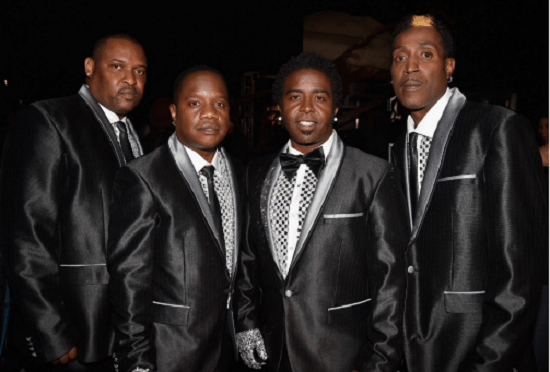 The throwback performances at BET Awards shows are what make the annual broadcast worth watching. Here, fans of the old-school get to big-up the "real music" acts from back in the day. But, depending on how long it's been since these groups and solo stars have taken to the stage, results can be mixed, leaving die-hards either vindicated or red-faced.

This year's mixtape from the BET Awards '14 featured a late-'80s-to-early-'90s-quasi-New-Jack-Swing mash-up of performances from Troop, Color Me Badd and Silk. The network did few favors for the fans and the groups with this particular showcase.

Troop, donning matching suits with sparkle-filled accoutrements, crooned their (borrowed) classic ballad "All I Do is Think of You." The quintet — performing as a quartet — was the epitome of class, holding notes high and steady and staying in step with the choreography. Despite cutaways to younger acts swaying to the middle school dance staple and clearly perplexed as to who or what Troop is or was, this one was a win for the old school.

Thank goodness for the other bookend act, a five-membered Silk, who already had the crowd on its feet when the familiar refrains of "Freak Me" came over the sound system. Audience members knew the words — in fact they knew them so well, it felt that they were the focus of the showcase more so than Silk. In the brief seconds the group appeared on screen, the notes sounded strained at times and the group was more than a little all over the place — on stage, trying to seduce ladies in the audience, hunting for a camera to stare into, etc. But it wasn't an all "aww damn" moment, as the choreography helped, the vocals improved and a diamond was salvaged from the initially rough performance.

But it also gave some evidence as to why Troop went first— since folks still would have been throwing side-eye had the order of performances been reversed. Troop definitely won the night among these three acts, with an overall "it was OK" being given to the entire showcase.