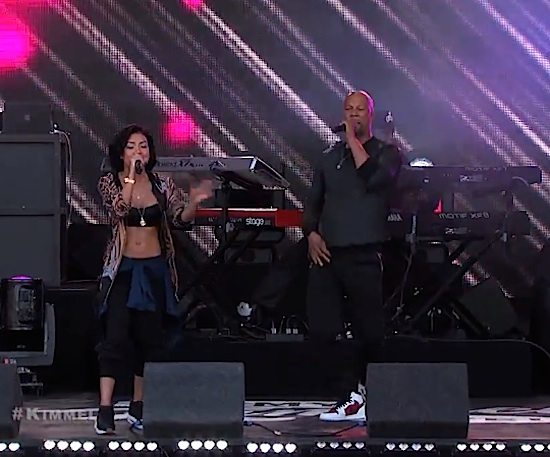 Common is in full swing promotion mode for his latest album, Nobody's Smiling. He already wowed fans with a Yahoo! Live live stream of his album release concert, and last night he hit the West Coast to play on the stage of Jimmy Kimmel Live! to perform two tracks from the set.

Cali girl Jhené Aiko joined Com on stage for their track, "Blak Majik," and despite the weird inclusion of two black-and-white leotard-clad modern dancers, the duo managed to rock the stage, with Jhené even mimicking a bit of Common's around the way swagger as she performed her feature. In fact, the energy of the two on stage was so great that neither could really stand still, only stopping at the beginning and end of their set to pose with with their fists raised in the air.

Newcomer Vince Staples similarly held his own when he joined Com on stage for their track, "Kingdom." Trading verses with Com, Vince rocked the crowd with the confidence of a seasoned vet and had the crowd rocking along with them (though one can only wonder if they were also listening to the serious lyrical content of the song).


TAGS:  common, jhene aiko, Jimmy Kimmel Live, Vince Staples
Previous: Joe Doesn’t Want To ‘Lose Her’ Next: Jessie Ware Wants To ‘Share It All’ With You