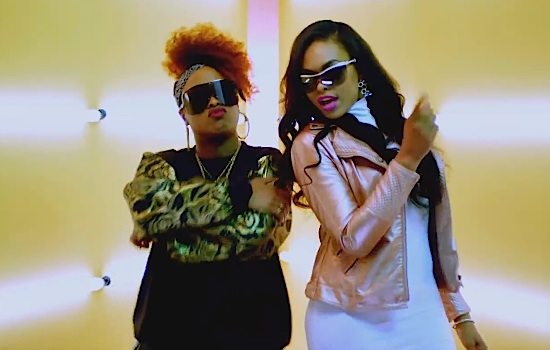 Having starred in the award-winning series Tyler Perry’s House of Payne, as well as having recurring roles on The Rickey Smiley Show and Devious Maids, multi-talented singer Demetria McKinney is no stranger to the small screen. She also knows her way around a music video, having starred alongside Avery*Sunshine and Musiq Soulchild on separate occasions. Now that she’s ready to turn some focus onto her own music career with the release of her EP, Officially Yours, she recently released her latest video, “100.” With a fair amount of previous experience, it wouldn’t be a far stretch to expect big things from her...right?

What Demetria delivers is a checklist for pretty much every successful '90s hip-hop/R&B video ever made: basic choreography, boldly-colored backgrounds, bouncing booties, fake ponytails, a boardroom scene, building rooftop dancing and a cityscape complete with skyscrapers. And if that isn’t enough, Demetria brought along Da Brat (who totally steals the show, by the way) as her co-pilot for this trip back in time. While I’m a fan of her vocal ability, I can’t say that I’m quite as impressed with this video. If you’re “keepin’ it 100,” seems like the video could’ve been a little more...I don’t know...original. But maybe it’s just me. Nevertheless, I’m looking forward to hearing (and seeing) what she has in store for us in the near future.

Check out the visuals below and decide if Demetria is really ready for prime time.


TAGS:  Avery*Sunshine, da brat, demetria mckinney, musiq soulchild"
Previous: Esta Wants To Be ‘Down’ With Brandy On This Remix Next: Gladys Knight Wants You To ‘Hear’ Avehre Out