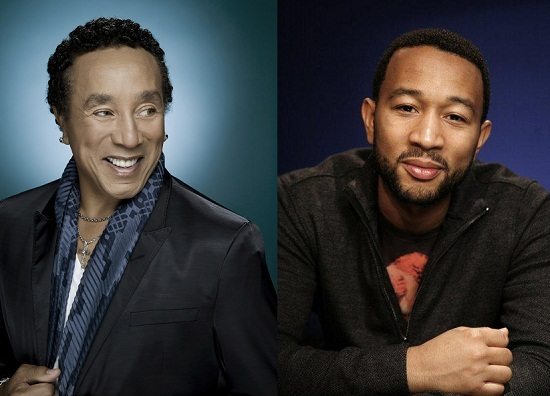 After hearing that music legend Smokey Robinson was combing through his past hits for his duets album Smokey & Friends, we here at SBHQ were both happy and a little apprehensive. You see, Smokey has a back catalog of songs that would make even your most favorite green with envy. He also has sang and written more than a few timeless classics that honestly ain't broke and don't need any fixing.

With the project coming our way in August, we were bound to soon get a taste of the full project, and that we have with the John Legend-featuring "Quiet Storm." Of course a remake of Smokey's 1975 classic that began an entirely new radio format, John and Smokey tickle the ivories as they perform the subtle, sensual jam. However, while Smokey's silky smooth voice shows little wear in the 39 years since he released the original, John's vocal technique doesn't seem to work as well here. Whereas Smokey is all about finessing the listener with his vocal, John applies an unneeded urgency with his opening verse that runs over the soft, sweet melody. With an undeniable groove so tender and delicate, you don't need such an overwrought vocal to get your point across.

That being said, after Smokey reins things back in on the second verse and the two come together, things go much, much smoother, with the younger singer seeming to take a few notes from Smokey's performance. All and all, it's not a bad attempt, but it doesn't quite have the magic of the original either. Hopefully the other duets feel just a tad bit more organic when we get our hands on the set come August 19th.


TAGS:  audio, john legend, smokey robinson
Previous: Laura Doggett Is On The Rise With ‘Phoenix’ Next: Jaded Inc. Gets NSFW & Unconventional With ‘People’