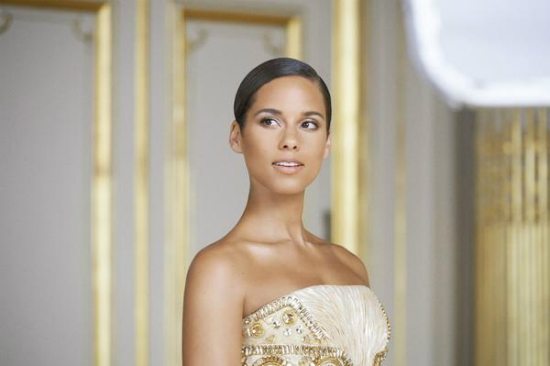 Alicia Keys is clearly having a great summer. In addition to revealing that she's expecting her second child with her producer hubby Swizz Beatz, she also was tapped as the face of Givenchy's latest fragance, Dahlia Divin, back in June. While we were treated to the promotional images at the time of the announcement, we are just now getting a glimpse of the actual commercial.

The 30-second spot was clearly shot at the same time of the print ads that have been appearing in magazines and across the internet since June. As the gold-drenched clip opens to the tune of her signature piano keys, she is awakened from a slumber and proceeds to break free of the box that contains her, symbolizing that the Dahlia Divin woman cannot be boxed in.

The commercial's accompanying song stays true to Keys' musical style, providing the perfect blend of classic-meets-contemporary. Keys looks beyond beautiful in her first-ever beauty campaign, which came about thanks to her personal relationship with the fashion house's Creative Director Riccardo Tisci. The scent is described as containing accents of sandalwood, tetiver and patchouli mixed with notes of golden fruit, jasmine and mirabelle plum and will be available in stores in September.